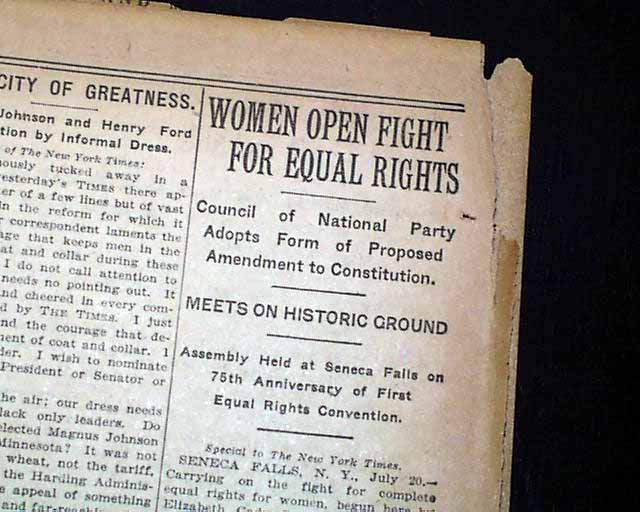 
NEW YORK TIMES, July 21, 1923  Page eight has the significant report from Seneca Falls, New York, on the woman's Equal Rights Convention held on the 75th anniversary of the first attempt in 1848 to gain equality for women, initiated by Lucretia Mott, an early suffragist.
The one column heads include: "Women Open Fight For Equal Rights" "Council of National Party Adopts Form of Proposed Amendment to Constitution" "Meets On Historic Ground" "Assembly Held at Seneca Falls on 75th Anniversary of First Equal Rights Convention".  Included in part is the presentation for adoption of Alice Paul's draft of the Equal Right Amendment, also known as the "Lucretia Mott Amendment".  The Amendment was introduced in every session of Congress since then until it was approved, in reworded form, in 1972.
The issue is complete, leaves loose at the spine, brittle with various chipping at the margins which includes some loss of text, particularity at the lower left. However the mentioned content is not affected by any loss.

Amelia Earhart flies solo across the ...