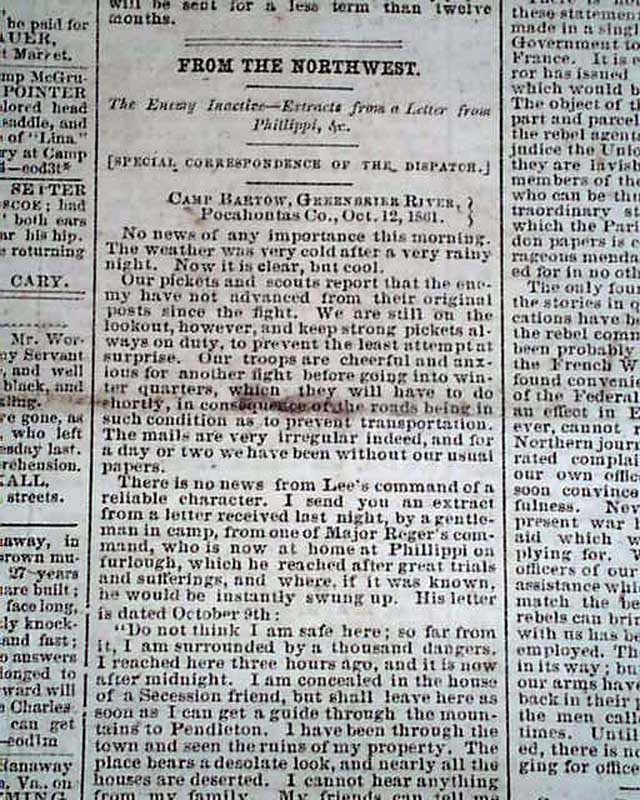 
DAILY DISPATCH, Richmond, Virginia, Oct. 16, 1861  A nice newspaper from the capital of the Confederacy. Among the front page reports are those headed: "From the Northwest--The Enemy Inactive--Extracts from a Letter from  Phillippi" "Gen. Fremont's Prospects in the West" which takes over half a column; "Secession Tricks in Europe" "Captain Todd & the New York Press" "The Women of the South" and other items including a large number of advertisements.
Civil War coverage on the inside pages include: "Craney Island" "The Charming Young Jessie", the wife of General Fremont; "Women of the South" "Army of the Potomac--A View of the Federals--Escape of a Yankee Prisoner--Arrival of Californians..." "Yankee Expenditures" "Waiting for Another Bull Run" "Engagement on the Potomac" "Southern War News--Arrest of Lincoln Spies in New Orleans--Movement of Mississippi Troops--Camp Life in Floyd's Brigade..." "From The West" "Late Northern News--The Missouri Question--The violation of the Savannah Blockade..." "McClellan Going Under" "A New Feature of the War" and even more.
Complete in 4 pages with a banner masthead, very nice condition.