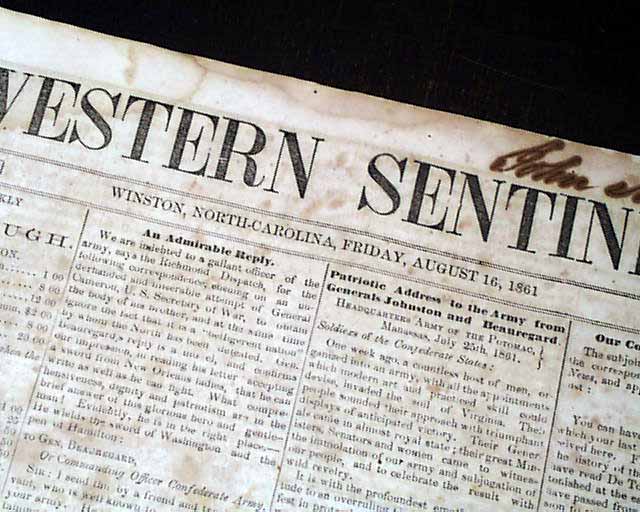 This is a very rare title from the Confederacy. According to Brigham only four institutions in the United States have any holdings of this title from the Civil War, most just a few scattered issues. The American Antiquarian Society has no issues recorded from this era.
Content in this issue includes, on the ftpg., a "Patriotic Address to the Army from General Johnston and Beauregard", signed in type: J. E. Johnston & G. T. Beauregard. Pg. 2 has an endorsement: "For President: JEFFERSON DAVIS, Of Mississippi. For Vice President: ALEX. H. STEPHENS, Of Georgia." Also on pg. 2 are: "The Confederate Loan" "Southern Men to be Handcuffed & Used as a Breastwork" "Retaliation" "East Gettessee Getting All rights" "Effects of the Manassas Battle" "Loss of the Yankees" with more war content carrying over to pg. 4.
Four pages, scattered light foxing, the subscriber's name penned above the masthead, very nice condition.