Home > Back to Search Results > Jesse James comes to his own defense: lengthy letter signed by him...
Click image to enlarge 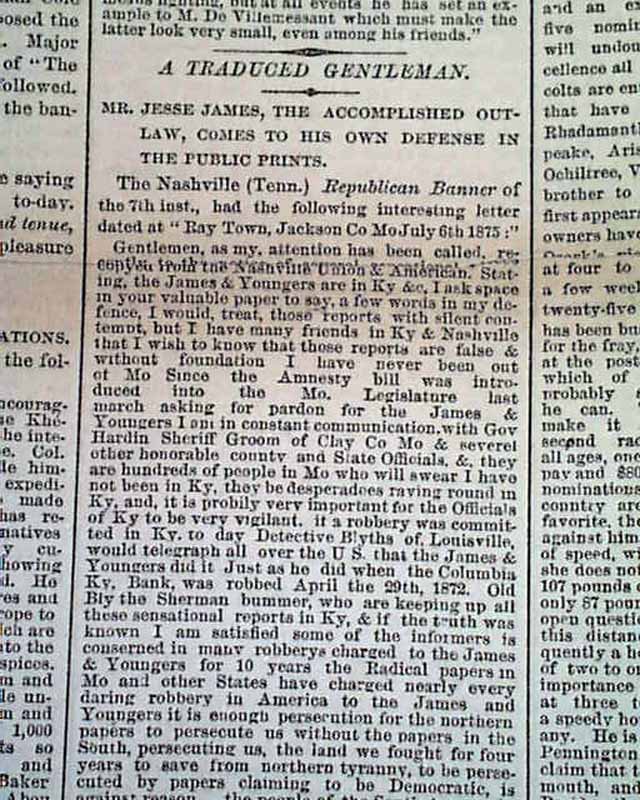 Jesse James comes to his own defense: lengthy letter signed by him...


THE NEW YORK TIMES, July 20, 1875  Not only does this issue contain the very first mention of notorious outlaw Jesse James in the venerable Times, but the report is almost entirely taken up by an excellent letter signed by him in type: Jesse James. This is the first I have seen in print a letter signed by the outlaw. He takes great pains to exonerate himself for several crimes of which he was accused but which he claims no connection. The article is headed: "A Traduced Gentleman" "Mr. Jesse James, the Accomplished Outlaw, Comes to His Own Defense in the Public Prints". The letter originally appeared in a Nashville newspaper & is datelined "Ray Town, Jackson Co., Mo. July 6th, 1875". Portions include: "...several sensational pieces...stating the James and Youngers are in Ky., etc....a few words in my defence...I have many friends in Ky. & Nashville that I wish to know that these reports are false & without foundation. I have never been out of Mo. since the Amnesty bill was introduced...last march asking for pardon for the James & Youngers...are hundreds of people in Mo. who will swear I have not been in Ky...if a robbery was committed in Ky...Detective Blyths...would telegraph all over the U.S. that the James & Youngers did it...charged nearly every daring robbery in America to the James and Youngers. It is enough persecution for the norther papers to persecute us without the papers in the South persecuting us, the land we fought for four years to save from northern tyranny...The radikl papers here in Mo. have repeatedly charged the Russellville Ky. Bank robber to the James & Youngers..." and more (see photos). A terrific & very unusual item on Jesse James.
Complete in 8 pages, light browning, more so at the margins with some margin chipping and a few small margin tears. Must be handled with care.