Home > Back to Search Results > A "Cruise Around the World" newspaper from the midst of the Great Depression...
Click image to enlarge 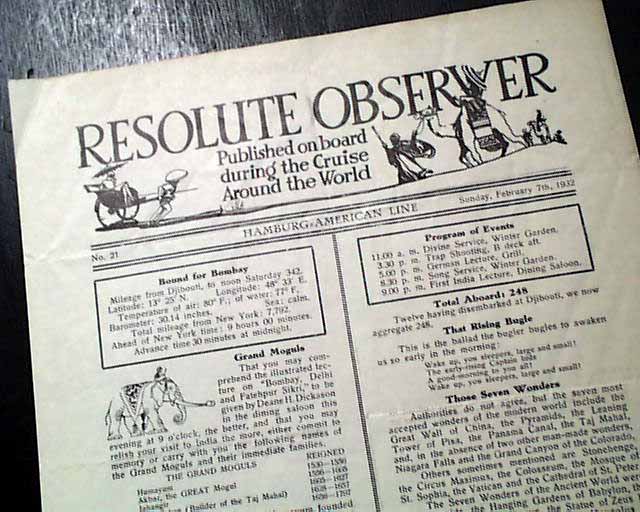 A "Cruise Around the World" newspaper from the midst of the Great Depression...


RESOLUTE OBSERVER, "Published on board during the Cruise Around the World." on the Hamburg-American Line, February 7th, 1932   An interesting broadside issue (printed on the front only) published daily during an 86-day cruise, with tidbits on the trip for that day including mileage, the day's destination, weather, conditions, etc. At this point the ship was "Bound for Bombay". An ironic newspaper evidencing how the wealthy "muddled through" the Great Depression.
As an added item of interest is a letter headed: "A Word of Welcome to the 'Resolute' World Cruise Party" by the Mayor of Nagasaki, Japan, welcoming the tourist to his city. Ironically 13 years later America would drop an atomic bomb on this city. This letter does not correspond to this particular issue but relates directly to the publication, hence included here (see).
Nice masthead, 9 by 13 inches, nice masthead, very nice condition.