Home > Back to Search Results > Massachusetts described... The newspaper "The Crisis"...
Click image to enlarge 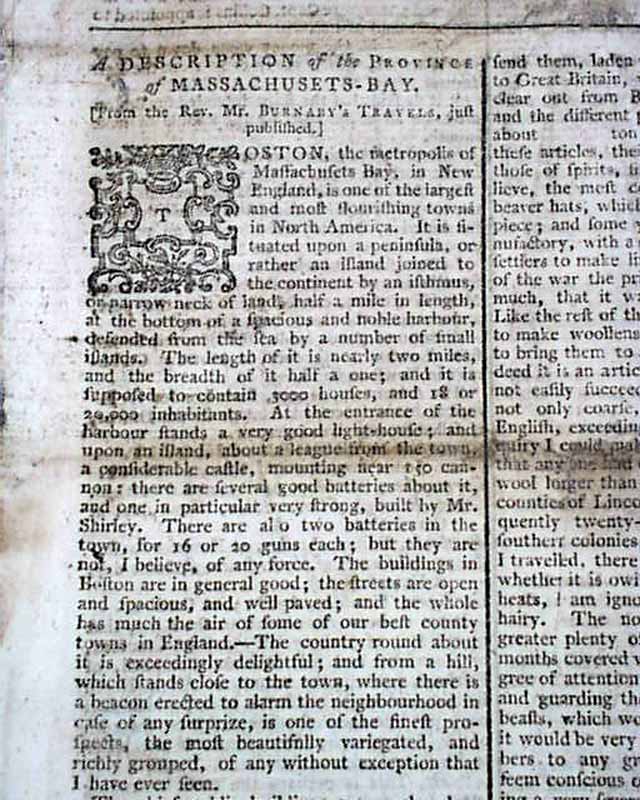 Massachusetts described... The newspaper "The Crisis"...


THE LONDON CHRONICLE, England, Feb. 28, 1775  The entire front page is taken up with: "A Description of the Province of Massachusetts Bay" which includes reports on the city of Boston. This article carries over to page 2 & is concluded in a future issue.
The back page has: "Parliamentary Proceedings" which includes: "...from the House of Commons on the subject of the pamphlet entitled, 'The Present Crisis with Respect to America Considered'...In consequence of this concurrence of the two Houses, the pamphlet will be burnt by the hands of the common hangman in Old Palace yard on Monday next...". Reports continue with talk of a new newspaper titled "The Crisis" (see our item 560464) with: "...that he had a periodical paper called 'The Crisis, No. 3" in his hand, which he desired might be read. He said it was fraught with doctrines of the most false, scandalous, and inflammatory nature...intending to alienate the affections of his subjects and designing to disturb the public peace."
Eight pages, 8 1/2 by 11 1/2 inches, lite dirtiness on the front page, otherwise in very good condition.