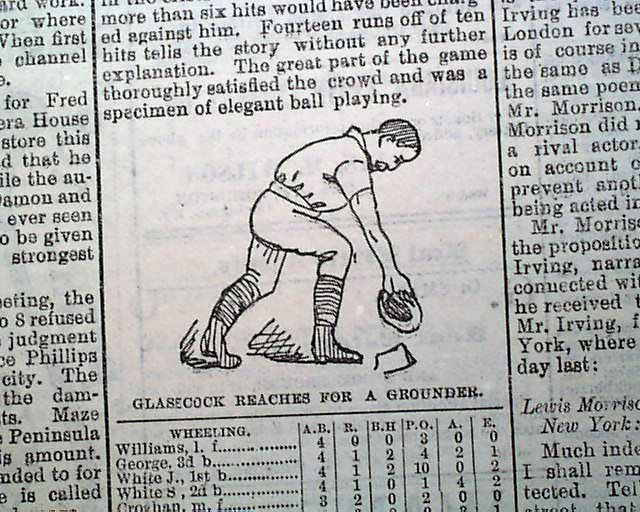 WHEELING DAILY INTELLIGENCER, West Virginia, Oct. 13, 1886  The back page has: "A Fine Game Of Ball" "On The Fair Grounds Diamond" "Yesterday Afternoon--A Home Amateur Team Holds up its End Creditably Against the St. Louis Maroons--The Boys Have Their Way at First". Included is a summary and box score of the game, plus three small illustrations within the text including one of Jack Glasscock captioned: "Glasscock Reaches For A Grounder". He was one of best shortstops of the nineteenth century. The report includes: "There was no exceptional work on the part of the League team with the exception of Glasscock, who got everything that came...his way and some things that didn't."  Also: "...The Maroons made their remaining runs...on a base on balls, a hit by Kirby and a darling by Glasscock for three bases to left centre...".  See the internet for more on Jack Glasscock.
Great to have in a Wheeling paper, Glasscock's hometown as well as his burial place.
Four pages in very good condition.