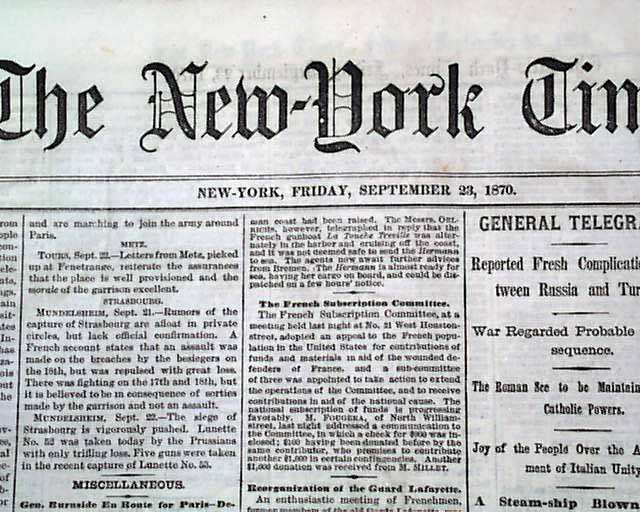 
NEW-YORK TIMES, Sept. 23, 1870  Page 3 has: "Base-Ball The Championship Contest--Mutual vs. Atlantic--The Mutuals Win the Champion Pennant --Score 10 to 4". The summary (see) mentions that there was: "...a very large gathering of spectators on the Union Grounds...despite the fact that the admission fee was double the usual charge." Also says there was the largest gathering of fence peepers ever seen at a baseball match, and because there was such an interest in the game: "...the telegraph companies laid a wire to the grounds, and at the close of each inning, the result was telegraphed direct to Cincinnati, St. Louis, Chicago, Boston and New Orleans." Many other particulars about the excitement and the game. Includes the box score. A great report with a touch of baseball history.
Eight pages, very nice condition.
Note: "The Mutuals win the much-debated championship for 1870 by defeating the Atlantics 10-4 at Union Grounds. The game had such interest that inning by inning results are sent nationwide via telegraph wires. Several clubs would lay claim to the championship that year."