Home > Back to Search Results > Destruction Of the Arkansas... Yankee atrocities...
Click image to enlarge 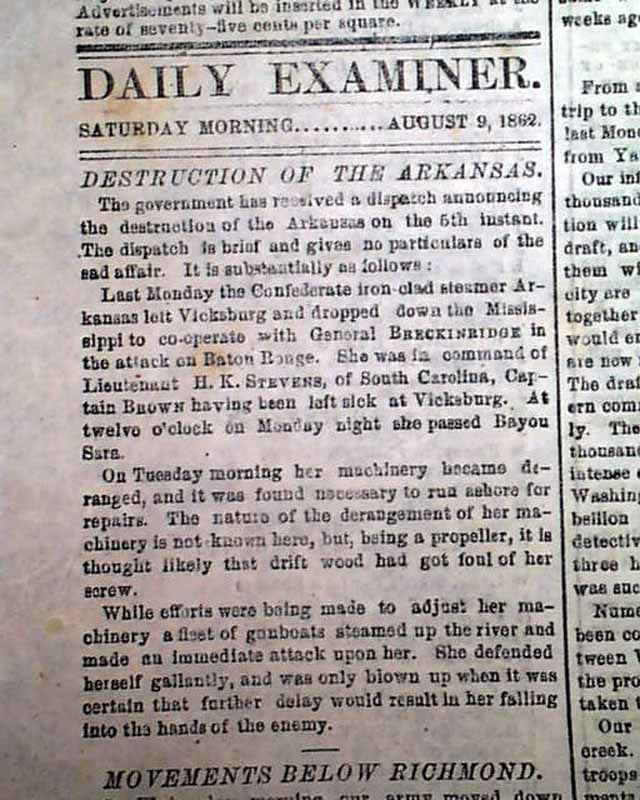 Destruction Of the Arkansas... Yankee atrocities...

Not only a Confederate newspaper but one from the capital of the Confederacy. Among the items on the front page are: "Destruction Of the Arkansas" "Movements Below Richmond" "News from Jackson via Petersburg--What the Knowing Ones Think" "From The South-Side" "From East Tennessee" "From The North" "Additional from the North" "Yankee Atrocities In Western Virginia--The Most Inhuman Cruelties & Murder of a Child" and other items. There are also four reward ads (see).
Among the back page items is the always interesting editorial, this one beginning: "The news from the West is both very cheering and very depressing..." with much more. Also: "the Battles Before Richmond In France--Confederate Agents Gone to See the Emperor" "Telegraphic News" "City Intelligence" and other items. There is a full column list of: "...soldiers confined in Castle Godwin and guard House...".
Complete as a single sheet newspaper, never bound nor trimmed, with a full banner masthead, in nice condition.