Home > Back to Search Results > Preliminary articles of peace are agreed upon...
Click image to enlarge 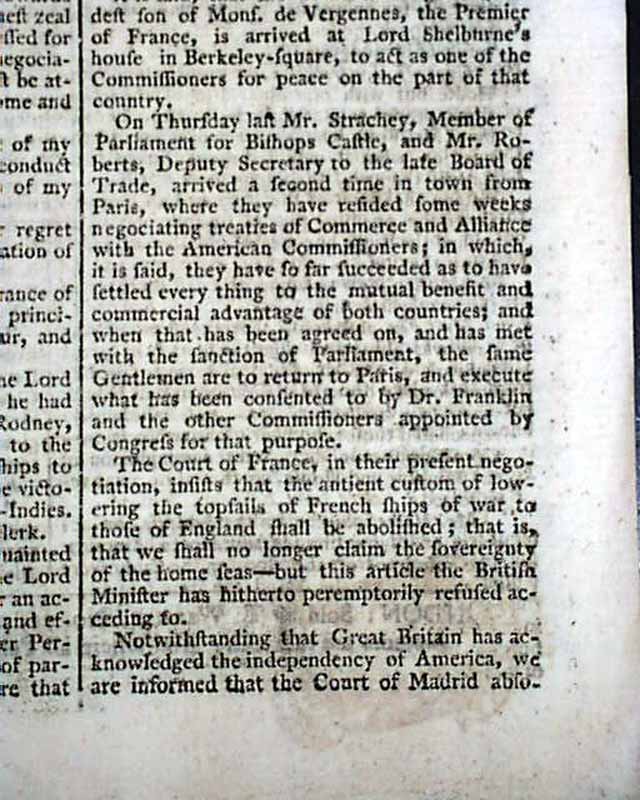 Preliminary articles of peace are agreed upon...

Page 5 has a report: "We all wish ardently for peace, nor do the people at large wish to impose harsh terms on England; they think she is sufficiently humbled and weakened by the loss of America; they remember their own dejected state at the conclusion of the last war, and adopt the expression of Dido to the distressed Trojans." Another pg. 5 report has: "The negociations between England and America are closed, a treaty having been completed between the United States and the Court of St. James's by which the great contest between England and America is finally determined by a full and irrevocable recognition of the sovereignty and independence of the once British Colonies. The articles of this Treaty are not known..." with further detail.
Inside has an item from Paris which notes: "Count de Grasse in his memorial sets forth that he has served 38 years...that the Americans are in some measure indebted to him for their independence by the protection he gave to York Town whilst he was in the Chesapeak...All the talk of this city is about peace; it is even said the preliminaries are signed."
The bkpg. has some significant news items: "Last night a courier arrived from Paris with the conditional preliminaries of a peace, signed by his Britannic Majesty's Ministers & those of American & the House of Bourbon; which preliminaries are now before his Majesty's Council for their consideration. The preliminaries of peace, which arrived last night, we are credibly informed, will be laid before the House of Commons for their approbation...It is reported, that the preliminary articles of peace were signed in Paris on the 4th inst.; or course the independence of America stands ratified by the honour of the Crown.". Even the ftpg. has mention of England granting independence, with: "Notwithstanding that Great Britain has acknowledged the independency of America, we are informed that the Court of Madrid [here carrying over to pg. 2] absolutely refuses to do it...".
Eight pages, 8 1/4 by 11 1/2 inches, nice condition.