Home > Back to Search Results > Working towards a peace treaty...
Click image to enlarge 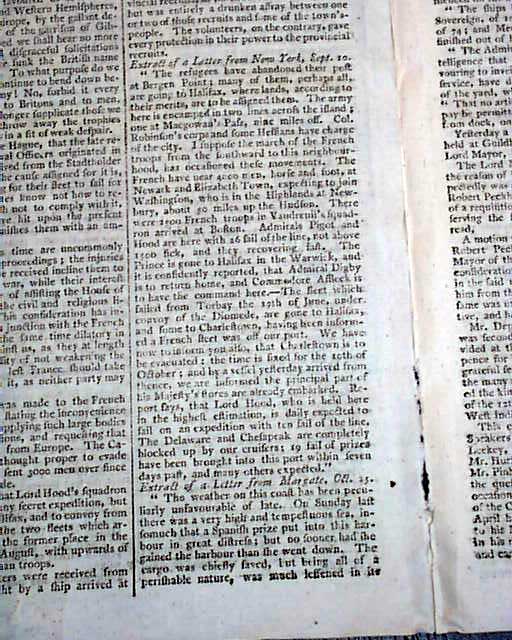 Working towards a peace treaty...

* Revolutionary War Era
* Working towards peace
* From The Enemy

Page 2 has a letter from New York which includes: "The refugees have abandoned their post at Bergen Point; many of them, perhaps all, are going to Halifax where lands, according to their merits, are to be assigned them..." with more. Page 4 has the 2nd part of the Treaty of Amity & Commerce with The Netherlands.
The bkpg. begins: "Mr. Adams, Minister Plenipotentiary from the United States of North America, took his leave of the President of their High Mightinesses..." which was his leaving The Netherlands. Also: "A private letter from Paris says...Dr. Franklin, and Mr. Jay for America....have had another conference with the French Ministry relative to a peace...We are informed that neither New York nor Charlestown will be evacuated till France shall give the most unequivocal proofs of its intentions respecting American Independence...".
Eight pages, 8 1/4 by 11 1/2 inches, very nice condition.