Home > Back to Search Results > Evacuating Charleston... Consternation of the Loyalists...
Click image to enlarge 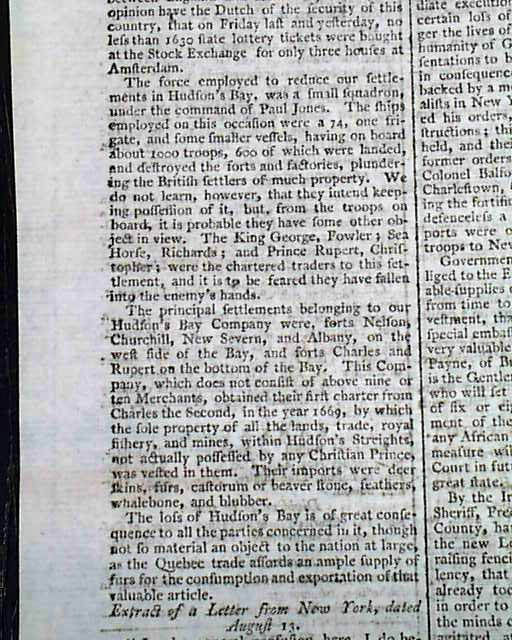 Evacuating Charleston... Consternation of the Loyalists...

* Revolutionary War Era
* From The Enemy

Page 2 has American content including rare mention of John Paul Jones: "The force employed to reduce our settlements in Hudson's Bay was a small squadron under the command of Paul Jones..." with more. Also a letter from New York which includes: "In the general confusion here I do believe...that his Majesty's Commissioners are more at a loss how to conduct themselves...The resolutions of Congress have frustrated all their plans--they have now three parties to keep in good humour, the enemy, the army, and the Loyalists...The last letters from New York say that Gen. Washington has crossed the North River..." with more on this. And then: "...garrisons remaining in South Carolina has had upon the minds of the Loyalists in that province. Another other information...that after the orders were received by General Leslie from Sir Guy Carleton for evacuating Charleston...Loyalists waited upon General Leslie to implore his assistance in the forbearance of his orders..." and more on this.
Page 7 has a lengthy letter from a man in England to a friend in New York concerning the plight of the Loyalists in America.
Eight pages, 8 1/4 by 11 1/2 inches, nice condition.