Home > Back to Search Results > Letter from Braxton Bragg...
Click image to enlarge 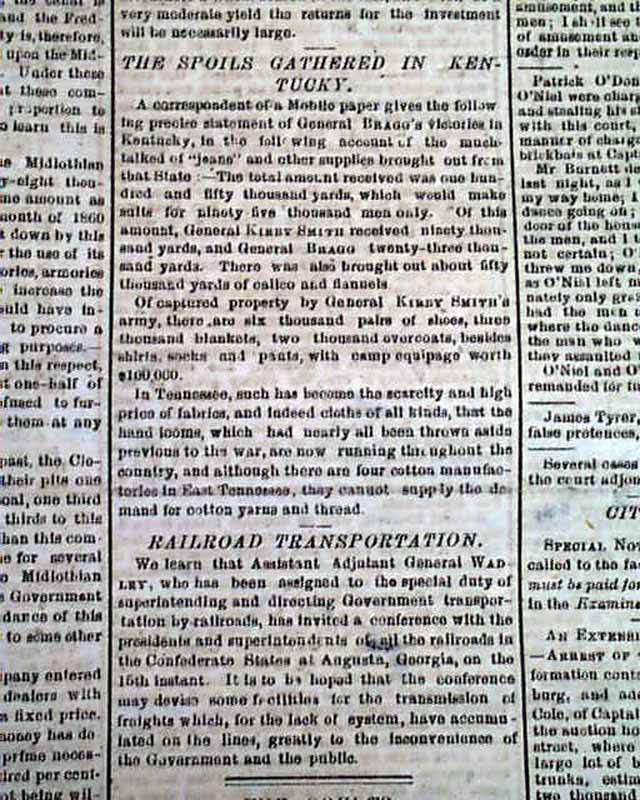 A nice newspaper not only from the Confederacy, but from its capital, through which all war-related news would flow.
The front page includes: "The Spoils Gathered In Kentucky" "Confederate States Prison Items" "The Prices of army Cloths" "Progress of the Abolitionists" "Capture of Gunboats" and more.
The back page has a lengthy editorial, as well as reports headed: "The Interest Felt in England in the American War" "the North Has Been Carrying on this War for Nearly Two Years--and What is The Result?" "An English Opinion of Butler's Rule in Orleans" "The Growing Discontent in the North--The Promises of the Yankees To take  Richmond--The Prospect of the Winter Campaign" "Crushing Out the Rebellion--A Yankee's Review of the Theatre of the War" "Affairs In Tennessee" and a dispatch signed in type: Braxton Bragg, among other items.
Complete as a single sheet newspaper, never bound nor trimmed. Nice condition.