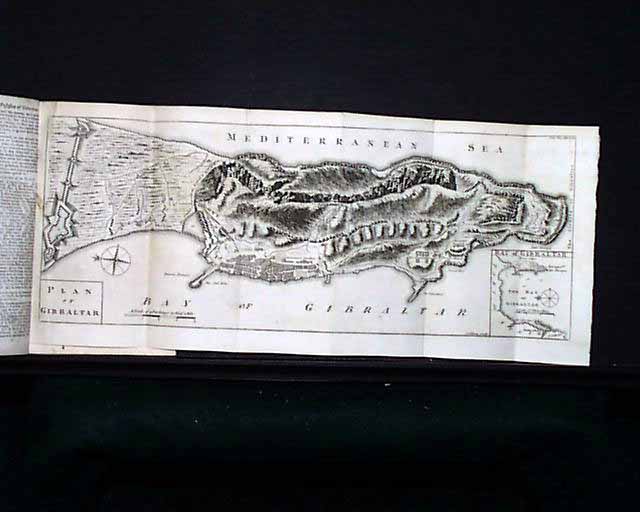 GENTLEMAN'S MAGAZINE, London, March, 1762  The prime feature of this issue is the nice foldout plate titled: "Plan of Gibraltar" which folds out to measure 8 by 18 inches (see). It includes an inset titled: "Bay of Gibraltar". There is a related & very detailed article: "The Advantages to England from the Possession of Gibraltar..." which takes over a full page.
This issue begins with a: "Scheme for Supplying the Cities of London and Westminster with Fish...". Other articles within include: "The Importance of Martinico [Dominican Republic] & the Islands in the West Indies yet Unsubuded" "Some Particulars of the Life of the late Empress of Russia" "Proceedings of the Forces against Martinico" "Capitulation of the Citadel at Fort Royal" and more.
Included is: "Extract of Two Letters from the West Indies" which includes reports from America, including in part: "...woman was taken prisoner about two years ago, just after a bloody action between the Pennsylvanians & Indians in which several of the Indian chiefs fell..." with more (see).
Near the back is the "Historical Chronicle" which has the latest news reports of the day, mostly European, but there is a small section headed "American News" with reports from South Carolina and New York, one report beginning: "The Cherokees, who came to ratify the last treaty, were much dissatisfied with the necessaries given them..." (see).
The mentioned map of Gibraltar is the only plate called for in this issue.
Complete in 52 pages, 5 by 8 1/4 inches full title/contents page featuring an engraving of St. John's Gate, very nice condition.