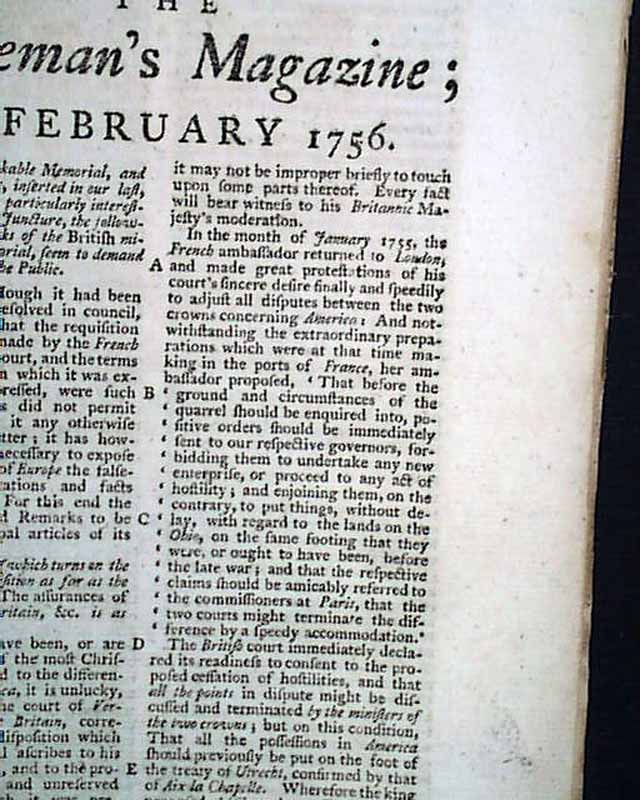 THE GENTLEMAN'S MAGAZINE, London, February, 1756  The lead article which takes 2 1/2 pages has much concerning the French & Indian War, debating the troubles between England & France. Other articles within include: "...Remarks on a Scheme made use of by the French in Order to ascertain the Strength & Riches of their Dominions in America" "Signs of an Approaching Earthquake" and much more.
Near the back is a lengthy article titled: "An Act for the Better ordering & Regulating such as are Willing & Desirous to be United for Military Purposes within the Province of Pennsylvania" which also deals with the Quakers not bearing arms, taking nearly 2 full pages.
Included are both of the full page plates called for. Complete in 48 pages, 5 3/4 by 8 3/4 inches, full title/contents page featuring an engraving of St. John's Gate, some pages unevenly trimmed, otherwise in very good condition.
A very nice magazine from the French & Indian War with a wide range of varied content including news of the day, political reports, literary items, and other unusual tidbits. This was the first periodical to use the word "magazine" in its title, having begun in 1731 and lasting until 1907.