Home > Back to Search Results > Captain James Lawrence: "Don't Give Up the Ship!"...
Click image to enlarge 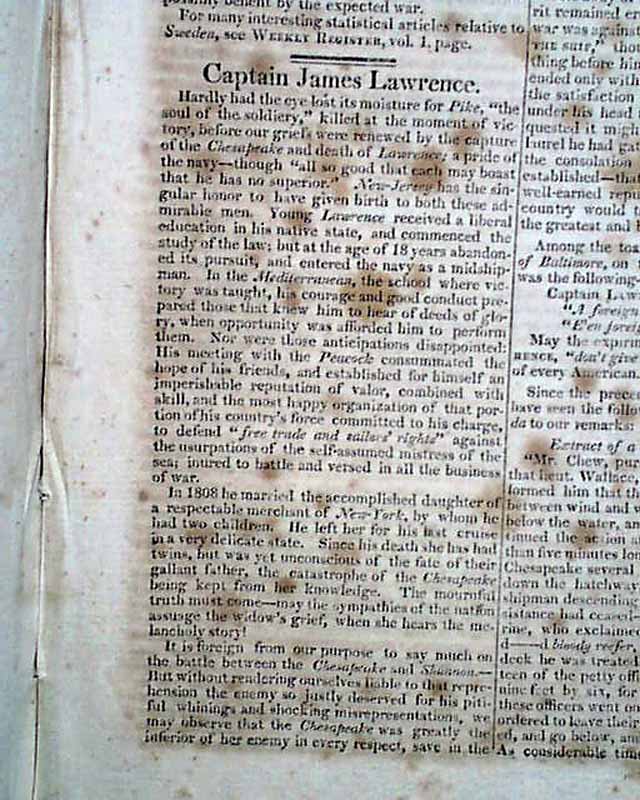 Captain James Lawrence: "Don't Give Up the Ship!"...

THE WEEKLY REGISTER, Baltimore, Maryland, July 10, 1813  An inside page has a report headed: "Captain James Lawrence" which reports his death and gives a short biography of his life as well. The text includes: "...our griefs were renewed by the capture of the Chesapeake & death of Lawrence; a pride of the navy..." and telling a bit of his life it says: "The body of Lawrence was prostrate; but his spirit remained erect. He saw & felt the fortune of war was against him--yet cried out, 'Don't Give Up The Ship', though the enemy was carrying everything before him..." with more, and near the end his famous quote is mentioned again with: "...Captain Lawrence...May the expiring words of the illustrious Lawrence, 'don't give up the ship', be the eternal motto of every American."  There is more as well carrying over to the next page. In total over a full page of text on Lawrence (see photos).