Home > Back to Search Results > Comets... South Carolina... Engraving of an Egyptian woman in traditional dress...
Click image to enlarge 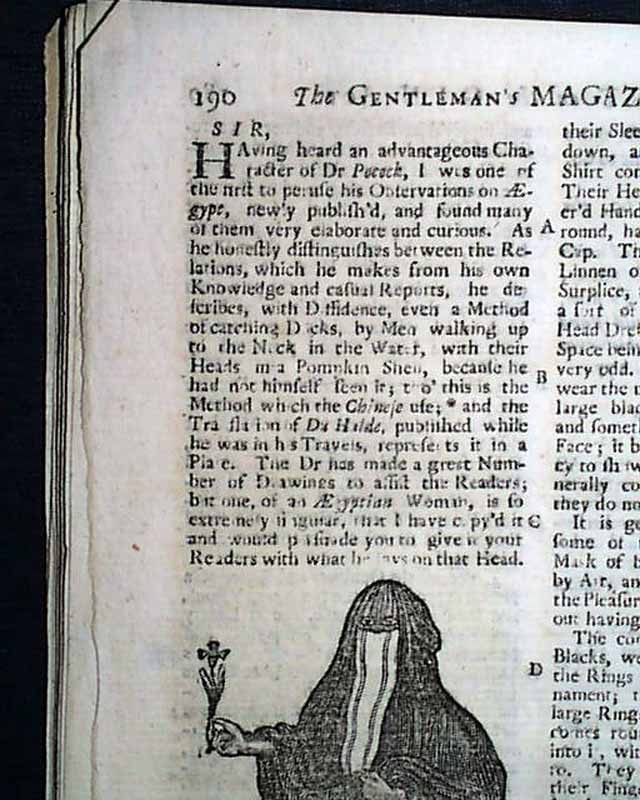 Engraving of an Egyptian woman in traditional dress...

Within this issue is an interesting & unusual engraving showing the traditional garb of an Egyptian woman, with related text (see photos).

Over 3 pages are taken up with a detailed article: "A New Theory of Comets" by R. Yate.

Two pgs. are taken up with charts headed: "An Exact List of the French Army"

Among the other articles in this issue are: "Revolutions in the empire of Morocco," "Number of People in Holland" (includes 2 charts), "Character & Duty of a Preacher," and "Of the Expedition to Carthagena." Near the back is a section headed: "Historical Chronicle" with news from England & other parts of Europe. One of the reports  is headed: "Extract of a Letter from S. Carolina".

There is also much reporting on events in Parliament under the guise of: "Proceedings & Debates in the Senate of Lilliput" as direct reporting on Parliamentary events was prohibited.

Complete in 54 pgs. with full title/index page which contains an engraving of St. John's Gate. Measures about 5 by 8 inches, very nice condition. There are no maps or plates called for in this issue.