Home > Back to Search Results > Map of the Old World before the Great Flood... More Protestant Germans for Georgia...
Click image to enlarge 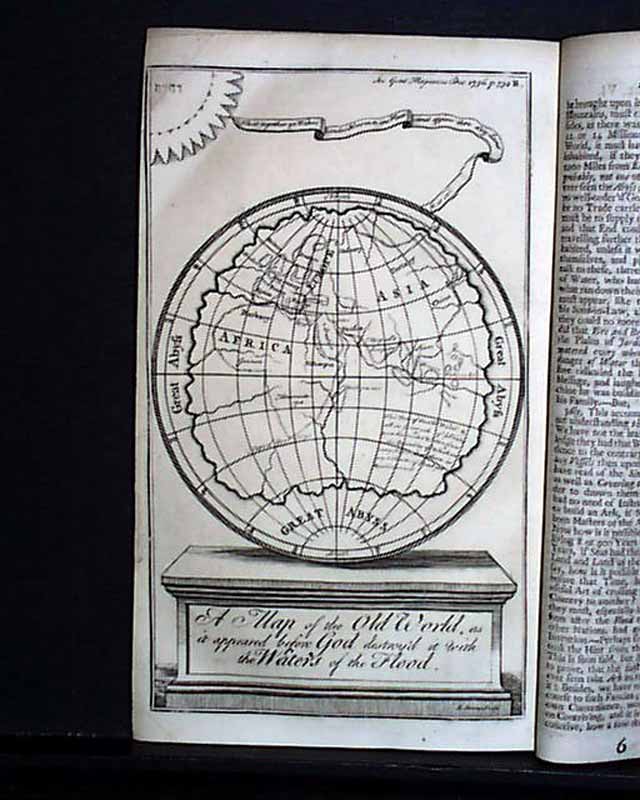 Map of the Old World before the Great Flood... More Protestant Germans for Georgia...

Perhaps of greatest significance is: "The People before the Flood did not Understand Navigation", with the accompanying sensational full page plate titled: "A Map of the Old World as it Appeared  Before God Destroy'd it With the Waters of the Flood" (see photos). This pate has a bit of (typical) spotting, but is in very good condition.

Near the back is a section headed: "Historical Chronicle" with news from England & other parts of Europe. A short bit notes: "The trustees for the colony of Georgia gave instructions to Mr. Von Reck to fetch more Protestants from Germany to be provided for in Georgia; those already there proving a very religious, diligent, & governable people." (see photos).

Other news of the day and reports from throughout the world are present.

Complete in 56 pgs. with full title/contents page which contains an engraving of St. John's Gate. Measures 5 1/4 by 8 1/2 inches, and in very nice condition. Although we are not certain, our decades of experience with this title indicates this is likely the very first map to appear in the Gentleman's Magazine.

A very nice pre-Revolutionary War magazine from the "mother country" with a wide range of varied content including news of the day, political reports& more. This was the first periodical to use the word "magazine" in its title, having begun in 1731 and lasting until 1907.