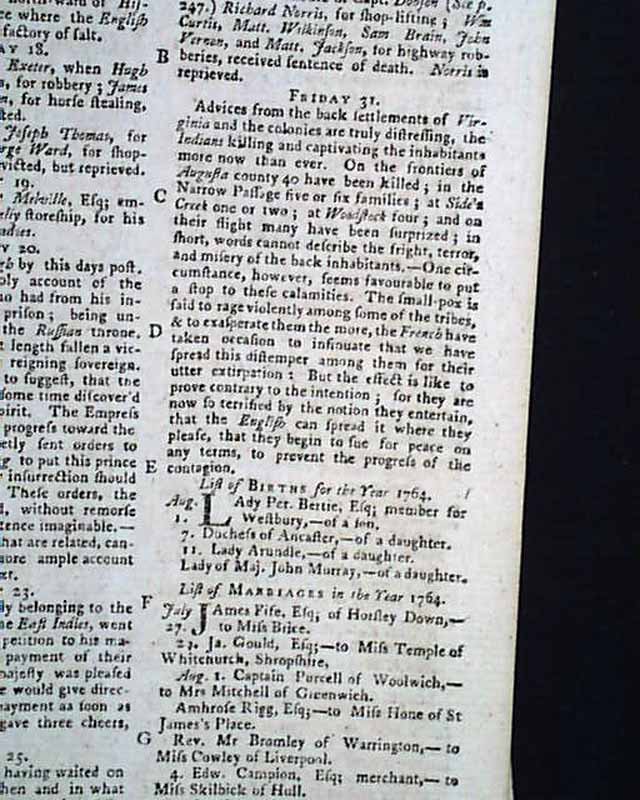 Item # 644388 GENTLEMAN'S MAGAZINE, London, August, 1764  Near the back is the "Historical Chronicle" containing various news reports of the day, including a report reading in part: "Advices from the back settlements of Virginia and the colonies are...distressing, the Indians killing...the inhabitants more now than ever. On the frontiers of Augusta county 40 have been killed; in the Narrow Passage five or six families; at Side's Creek one or two; at Woodstock four...words cannot describe the fright, terror, and misery of the back inhabitants...", plus word that some of the tribes had the small pox. Says the Indians might begin to sue for peace because they believed the English could spread the small pox: "...where they please..." (see).

Among the additional articles within are: "An Account of a Sea Animal Called a Sea Pen" which can be seen in the full pate plate (see images), "On the Disregard paid to Ancient Monuments", "An Account of Kamtschatka" (continued from the previous issue), "Description of the Shrew Mouse" which can be seen in the full page plate (see), "Case of the Logwood Cutters in Honduras Bay" and much more.

All plates called for are present. Complete in 48 pages, 5 by 8 1/2 inches, nice condition.