Home > Back to Search Results > John Burgoyne.... Regarding the surrender at Saratoga...
Click image to enlarge 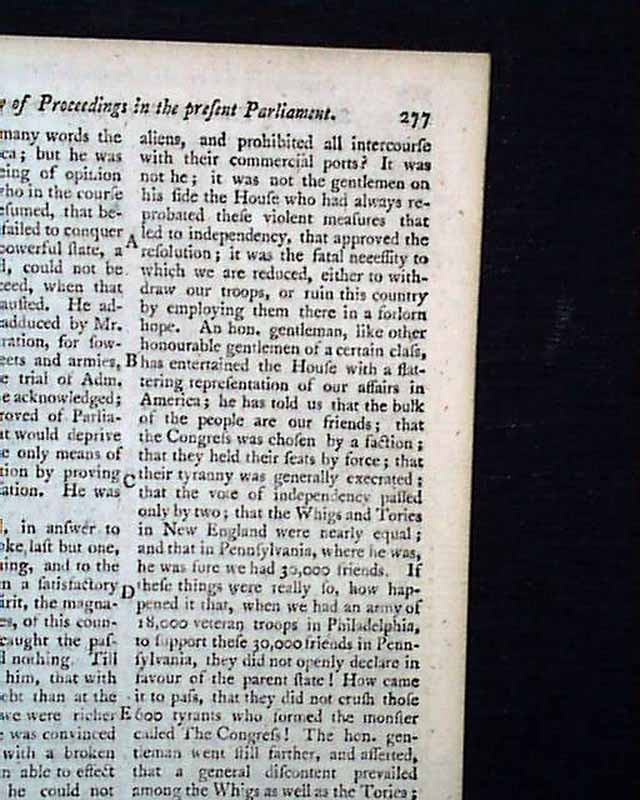 John Burgoyne.... Regarding the surrender at Saratoga...

Item # 644298 THE GENTLEMAN'S MAGAZINE, London, June, 1779  The first five pages are a: "Summary of Proceedings in the Present Parliament" which includes various discussions concerning the Revolutionary War, including one interesting bit: "...told us the bulk of the people are our friends; that the Congress was chosen by a faction; that they held their seats by force; that their tyranny was generally execrated; that the vote of independency passed only by two; that the Whigs and Tories in New England were nearly equal..." with more (see for portions).
Near the back is over a full pages of: "Advices Received from America" which begins: "The reasons assigned by Congress for the detention of the troops who surrendered at Saratoga...are not...generally known..." and further on: "...Resolved that the charge made by Lieut. Gen. Burgoyne in his letter to Maj. Gen. Gates...of a breach of public faith...is not warranted by the just construction of any article of the convention of Saratoga...therefore, that the embarkation of Lieut. Gen. Burgoyne & the army under his command be suspended till a distinct & explicit ratification of the convention of Saratoga shall be properly notified by the court of Great Britain to Congress." This is then followed by more text concerning the surrender of Burgoyne at Saratoga (see). Another item is a letter signed in type by: H. Clinton, to the governor of New Jersey, which includes: "...Had I a soul capable of harbouring so infamous an idea as assassination you, sir, at least would have nothing to fear; for be assured, I should not blacken myself with so foul a crime to obtain so trifling an end..." (see).
Further to the back is more correspondence concerning the Revolutionary War including  a letter to Gen. Clinton from Portsmouth, Virginia and one from Sir Geo. Collier on board the ship Raisonable, the former including: "...account of the success of an enterprize undertaken against the Virginians in Chesapeake bay..." and the latter including: "...by this enterprize the ingress and regress of the Chesapeak is rendered impracticable for the rebel vessels without being taken...he advices the holding the port of Portsmouth as the most important of any the crown possesses in America..." with more (see).
Includes the foldout plate of Etruscan inscriptions called for. Complete in 54 pages, full title/contents page with an engraving of St. John's Gate, measures 5 1/4 by 8 1/4 inches, the front cover is close-trimmed which does cause some loss of text, otherwise is very nice condition.

A fine magazine from the "mother country" from during the middle of the Revolutionary War providing an interesting perspective on war reports and British sentiment.