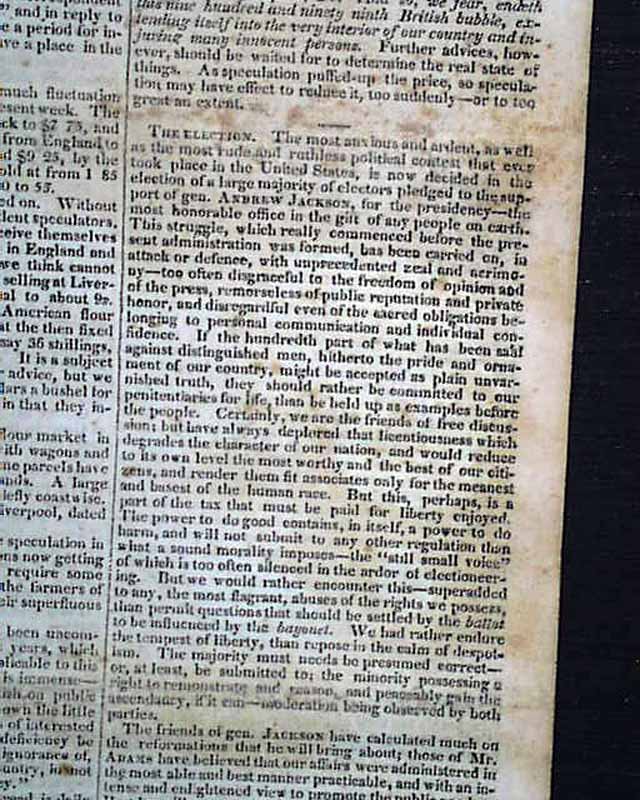 
NILES' WEEKLY REGISTER, Baltimore, Nov. 22, 1828  One of the front page reports has a small head: "The Election" which begins: "The most anxious & ardent, as well as the most rude & ruthless political contest that ever took place in the United States, is now decided in the election of a large majority of electors pledged to the support of gen. Andrew Jackson for the presidency..." with much more.
The article is rather lengthy, carrying over to page 2 with a total of nearly a full page of text.
This issue also has an article headed: "The Cherokee Nation" which has some talk concerning their relocation, with a bit of text including: "...But Georgia desire to possess the lands of the Cherokees, and it is delicate & difficult to establish one sovereignty within another...". This is followed by a lengthy: "Message of the Principal chiefs of the Cherokee Nation to the General Council" which takes over 1 1/2 pgs.
Complete in 16 pages, 6 by 9 1/2 inches, little lite rubbing on front page, some very lite scattering foxing, otherwise in very good condition.