Home > Back to Search Results > New Orleans during the Confederacy...
Click image to enlarge 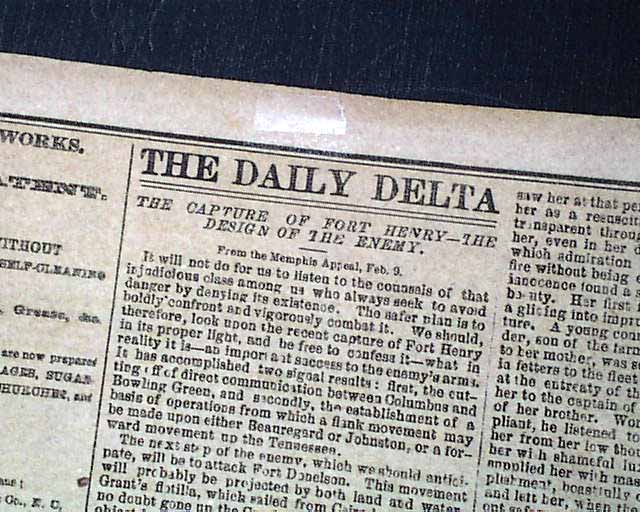 New Orleans during the Confederacy...

Truly Confederate newspapers from New Orleans are very difficult to find, as Admiral Farragut entered the mouth of the Mississippi in mid-April, 1862 and finally took New Orleans on April 28. Shortly thereafter Benjamin Butler moved in and took control of the city, it surrendering without a fight. So "Confederate" issues from New Orleans are limited to those published between Louisiana's secession from the Union on January 26, 1861 and the end of April, 1862, just a brief 15 month period.
Among the front page items are: "Letters From Capt. Semmes, of the Sumter" "Important From The Tennessee River" "From The Seat OF War In Virginia" "Our Ministers In England" "What the Morning Journals Say" and other items. Inside items include: "The President & the War" "Fight Or Perish" which begins: "The recent disasters of our arms must inaugurate a new mode of warfare on the part of the government & people of the Confederate States..." with more (see). Also: "The Spirit Of The People" "Bounty for Re-Enlistment" "The Capture of Fort Henry--The Design of the Enemy" and more.
Four  pages, even toning, a bit irregular at the spine, very nice condition.