Home > Back to Search Results > Mention of John Paul Jones, and more...
Click image to enlarge 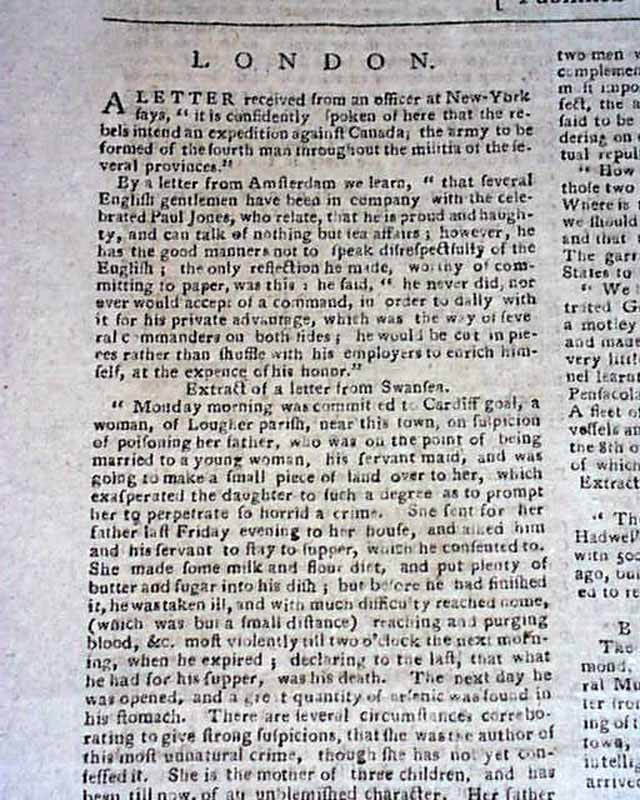 On the front page under "London" is part of a letter from Amsterdam stating: "...that several English gentlemen have been in company with the celebrated Paul Jones, who relate that he is proud & haughty, and can talk nothing of sea affairs; however, he has the good manners not to speak disrespectfully of the English; the only reflection he made worthy of committing to paper was this: 'he never did, nor...would accept...a command...for his private advantage...he would be cut to pieces rather than shuffle with his employers to enrich himself, at the expence of his honor.' ".
The front page also has a letter from Wilmington, North Carolina, which includes some details of the death of Colonel Parker. Also some details mentioning: "...a sortie by 200 of the besieged was made under the command of Col. Henderson of South Carolina...we charged with fixed bayonets & returned in six minutes having killed 17 & taken 22 prisoners. Deserters have since reported there were 50 killed...How unpardonably cruel to leave the brave men of those two garrison to be mashed by superior numbers! Where is that aid which our brethren in 1776 promised we should never want? I will hope it is coming forward & that the present dark cloud will soon be dispelled...We have not been idle; a Colonel Pickens had penetrated Georgia within 5 miles of Savannah..." with more. A pg. 2 item has some interesting commentary including: "...our Admirals & Commanders of our fleets & armies seem totally deficient of the spirit, animation, and bravery of the immortal Wolfe."
An item on page 3 includes: "...that Col. De Lancey, with a party of his loyal band of refugees, yesterday returned from a successful incursion upon the enemy of whom they killed ten...but this cost the Colonel the loss of a brave officer, Capt. Fowler, who was killed by the enemy's fire from a window...the house was immediately consumed to ashes." There are various other war-related tidbits as well, including reference to Bunker's Hill, and mention that conquering America is a melancholy prospect and "To persevere is madness!"
Four pages, very ornate & handsome masthead makes this issue great for display. Never-trimmed margins, just a slight bit of fold rubbing to part of the ftpg., generally in excellent condition.