Home > Back to Search Results > Abolishing the slave trade in England...
Click image to enlarge 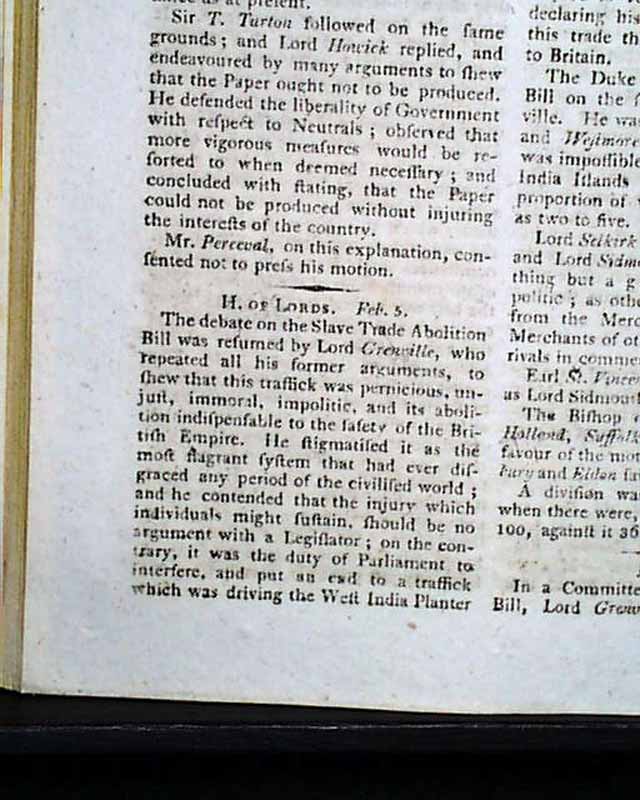 Abolishing the slave trade in England...

Within this 90+ page issue is a report from the House of Lords datelined Feb. 5, which begins: "The debate on the Slave Trade Abolition Bill was resumed by Lord Grenville who repeated all his former arguments to shew that this traffick was pernicious, unjust, immoral, impolitic, and its abolition indespensable to the safety of the British Empire..."with much more (see photos) and taking over half of the page. Following this is another report datelined Feb. 6 with further discussion on the Slave Trade Bill (see photos). Great to have this report in a British periodical. The bill would be passed by Parliment on March 25.
You get the complete 90+ page issue, measures about 5 by 8 1/2 inches, full title/index page, some scattered foxing but generally in very nice condition.

source: wikipedia: William Wilberforce (24 August175929 July1833) was a British politician, philanthropist, and abolitionist who was the leader of the parliamentary campaign against the slave trade. Wilberforce began to collaborate more with the Whigs and the abolitionists in that party. He gave general support to the Grenville-Fox administration of February 1806 after the death of Pitt. Wilberforce and Charles James Fox thus led the campaign in the House of Commons, while Lord Grenville advocated the cause in the House of Lords.

A change of tactics, which involved introducing a bill to ban British subjects from aiding or participating in the slave trade to the French colonies, was suggested by maritime lawyer James Stephen in early 1806. It was a smart move, as the majority of the ships were, in fact, now flying American flags, though manned by British crews and sailing out of Liverpool. The new Foreign Slave Trade Act was quickly passed and the tactic proved successful. The new legislation effectively prohibited two-thirds of the British slave trade. This was in part enabled by Lord Nelson's victory at the Battle of Trafalgar, which had given Britain the sea power to ensure that any ban could be enforced.[3]

The death of Fox in September 1806 was a blow to the abolitionists. Wilberforce was again re-elected for Yorkshire after Grenville called for a general election. He and Clarkson had collected a large volume of evidence against the slave trade over the previous two decades. Wilberforce spent the latter part of the year following the election writing A Letter on the Abolition of the Slave Trade, which was an apologetic essay summarizing this evidence. After it was published on 31 January1807, it formed the basis for the final phase of the campaign.

Lord Grenville had introduced an Abolition Bill in the House of Lords, and made an impassioned speech, during which he criticized fellow members for "not having abolished the trade long ago," and argued that the trade was "contrary to the principles of justice, humanity and sound policy." When a final vote was taken the bill was passed in the House of Lords by the unexpectedly large margin of 41 votes to 20. Sensing a breakthrough that had been long anticipated, Charles Grey (now Viscount Howick) moved for a second reading in the Commons on 23 February. As tributes were made to Wilberforce, who had laboured for the cause during the preceding twenty years, the bill was carried by 283 votes to 16. The Slave Trade Act received royal assent on 25 March1807.