Home > Back to Search Results > Plague mention in issue #6 of the rare Oxford Gazette...
Click image to enlarge 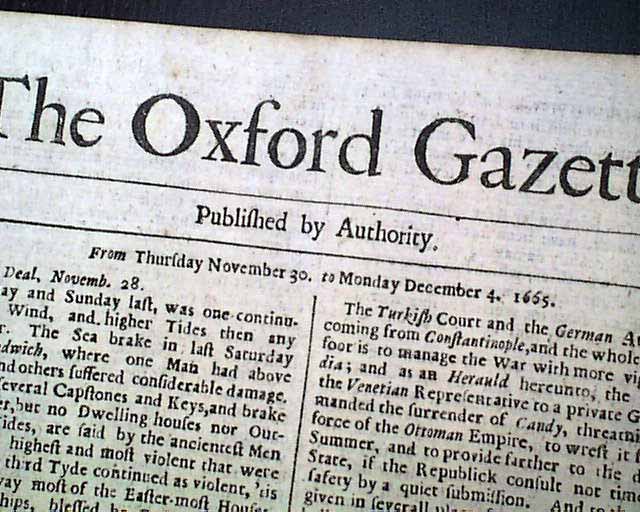 Plague mention in issue #6 of the rare Oxford Gazette...

This is an extremely famous--and rare--title, being the predecessor of the famous "London Gazette", the oldest continually published English language newspaper in the world. Plus this is the #6 issue.
Because of the Plague at this time, the Royal Court had removed itself from London to Oxford when this newspaper began, so issues #1 thru #23 were published simultaneously in Oxford & London and when the contagion had subsided & the Court returned to London this newspaper went with it and renamed itself "The London Gazette" with issue #24, and the rest is history.
The content is entirely taken up with reports from various parts of Europe, most with a military theme. The front page has a bit noting: "...The Plague, which doth usually take its course with the summer season, hath this year hitherto been very favourable to Constantinople; but fire, which is another evil incident to this city, hath burnt a considerable part of the Grand Seignors Seraglio..." Also on the ftpg., from Paris: "Since the infection at Calais, all intercourse from hence with that place is interdicted, and the English letters ordered to come to Bologne."
Complete as a single sheet issue, 7 by 11 inches in very nice condition.
Certainly a very scarce newspaper and a cornerstone issue for any early newspaper collection, being an early issue of the world's oldest continually published newspaper.