Home > Back to Search Results > Rare report of the taking of a fort in Wilmington, Delaware...
Click image to enlarge 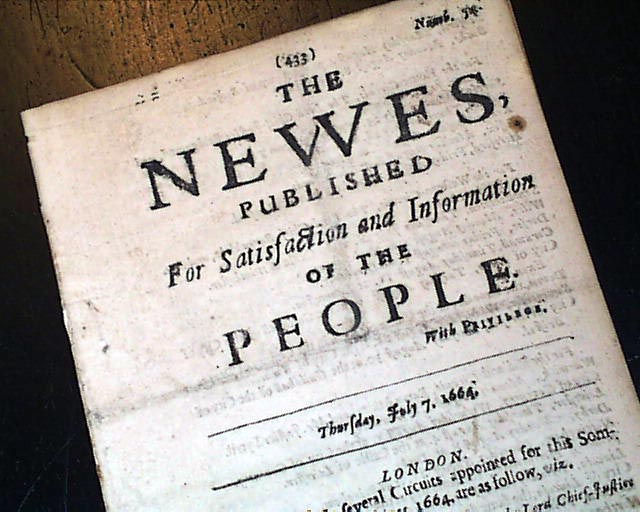 Rare report of the taking of a fort in Wilmington, Delaware...


THE NEWES, Published For Satisfaction and Information of the People, With Privilege, London, July 7, 1664

Here is an uncommon title in newsbook format (the forerunner of newspapers) with a terrific report from the "new world" in America. Pages 5 & 6 contain an item with a Stockholm dateline noting: "Here are great compleynts against the West-Indian company of Holland, for their violent dispossession the Suedes in the year 1655, of a Colony which they had planted South of Florida in America, being driven by the Hollanders out of the sayd Plantation, which they had not only purchased of the Natives, and Proprietors of the place, but had peaceably enjoy'd it for many years; nor have they to this day received any satisfaction in consideration of their damages; but they are in expectation that the states will fodainly take this business into their care."
This actually concerns Fort Christina in Wilmington, Delaware, which Peter Stuyvesant took way from the Swedes in 1655. The year before (1654) the Swedes had taken the Dutch Fort Casimir away from the Dutch so this was a simple retaliation. Fort Casimir would become the town of Newcastle.
Terrific and very rare to find a notable piece of early American history in such an early periodical.
Complete in 8 pages, 7 1/2 by 5 1/4 inches, nice condition.