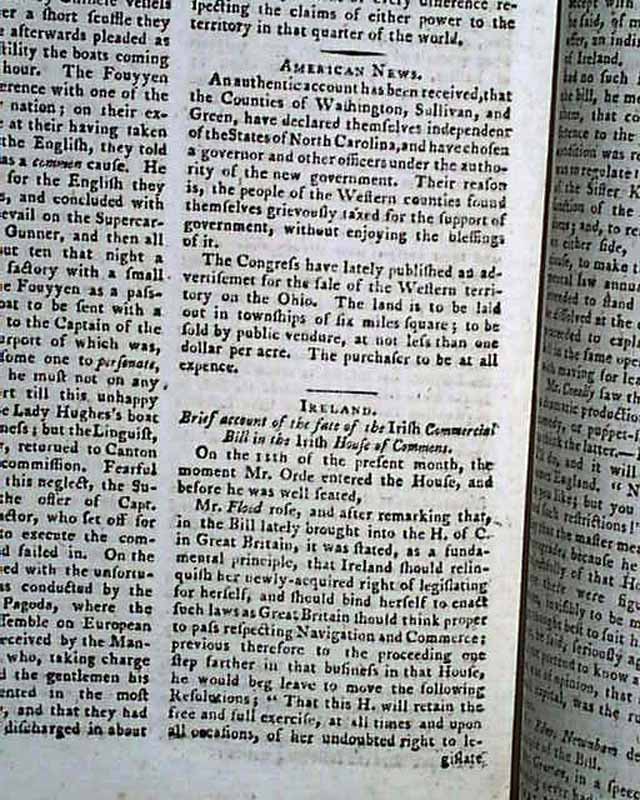 
GENTLEMAN'S MAGAZINE, London, August, 1785  Near the back is a small bit headed: "American News" which mentions that: "...the counties of Washington, Sullivan, and Green have declared themselves independent of the state of North Carolina..." because they: "...found themselves grievously taxed for the support of government without enjoying the blessings of it." This is a report of the short-lived "state of Franklin", a curious event in American history. Also mention that Congress is selling land i;n the Western Territory on the Ohio River, laid out in townships of 6 miles square.
Among the first articles is: "Brief Memoirs of the Late Ingenious Mr. Benjamin Martin...", who was a noted optician, instrument maker, spectacle maker, which includes a nice plate showing his portrait. Also within: "Old Ale Houses and Dancing Schools Described" "Bill Proposed for Regulating the Intercourse with Ireland" and "Crosbie's Attempt to Cross the Irish Sea in a Balloon" which is rather lengthy.
The plate called for is present, being a foldout, detached from the issue.
Complete in 92 pages, 5 by 8 1/4 inches, full title/contents page featuring an engraving of St. John's Gate, several tiny binding holes along the left spine, otherwise in nice, clean condition.