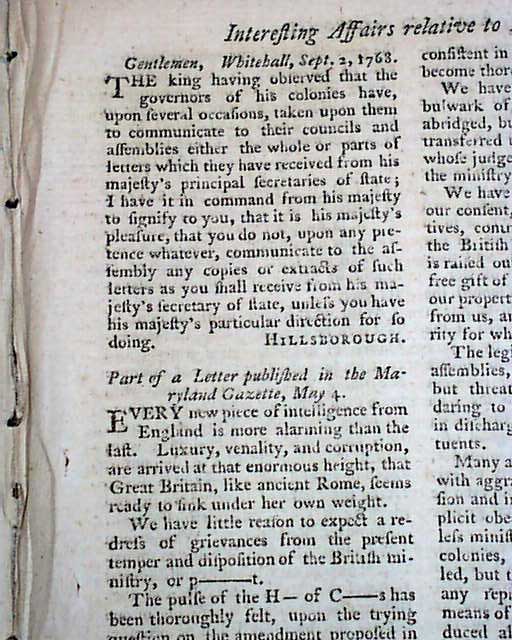 The most significant content is a seven page section headed: "Interesting Affairs Relative to America" filled with correspondence about the troubling situation in America. Included is: "Part of a Letter Published in the Maryland Gazette" which begins: "Every new piece of intelligence from England is more alarming than the last...We have little reason to expect a redress of grievances from the present temper & disposition of the British ministry...A people who were once free can hardly be deprived of many of their dearest & most valuable rights...The axe must be paid to the root of liberty & a plan of slavery made consistent in all its parts before it can become thoroughly practicable...We have been heavily taxed without our consent...Many assemblies have been dissolved...Our humble & dutiful petitions & remonstrances have been treated with contempt...A standing army is stationed among us in time of profound peace..." and much much more great reading.
This is followed by a great letter datelined "Virginia, June 8, 1769" and then by: "The Resolves of the Virginian Assembly...", and then: "A Remarkable Declaration in Favour of America" and even more including a letter by John Dickinson in which he disowns a piece ascribed to him by the Gentleman's Mag. in an earlier issue, signed: A Farmer in Pennsylvania.
The plate "A House in Stratford upon Avon in which the famous Poet Shakespeare Was Born" is present, the other is lacking.
Complete in 48 pages with a full title/contents page featuring an engraving of St. John's Gate, 5 by 8 1/4 inches, great condition.

A very nice magazine from during the midst of troubles leading to the Revolutionary War from the "mother country" with a wide range of varied content including news of the day, political reports, literary items, and other unusual tidbits. This was the first periodical to use the word "magazine" in its title, having begun in 1731 and lasting until 1907.