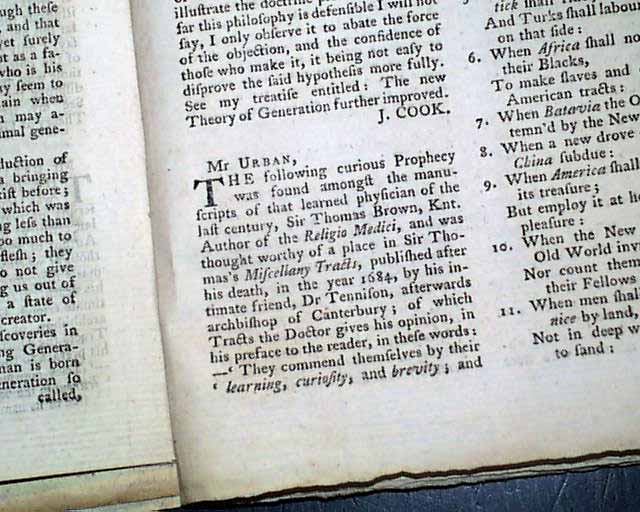 THE GENTLEMAN'S MAGAZINE, London, November, 1768  The inside includes: "American Transactions Continued" from the previous issue which takes over 10 pages with a great wealth of content concerning the growing tensions between England & the American colonies. Perhaps this lengthy text is summed  up best with one paragraph: "...We wish & pray for the happy time when a national attention shall be given to the grievances we labour under, & the true source of them. When such a period shall come, we are persuaded that the union & harmony which has hitherto subsisted between Great Britain & the colonies & upon which the welfare of both undoubtedly depends, will be confirmed & established..." with much more (see for just portions). Further on in the issue are 1 1/2 pages headed "Plantation News" with more on events in America.
Both of the full page plates called for are present, one showing a Chinese  pheasant, and the other "A View of the Dresses at the late Masquerade given by the King of Denmark" (see).
Complete in 48 pages, 5 by 8 inches, full title/contents page featuring an engraving of St. John's Gate.

A very nice magazine from before the Revolutionary War with a wide range of varied content. This was the first periodical to use the word "magazine" in its title, having begun in 1731 and lasting until 1907.