Home > Back to Search Results > Battle of Quebec in the French & Indian War...
Click image to enlarge 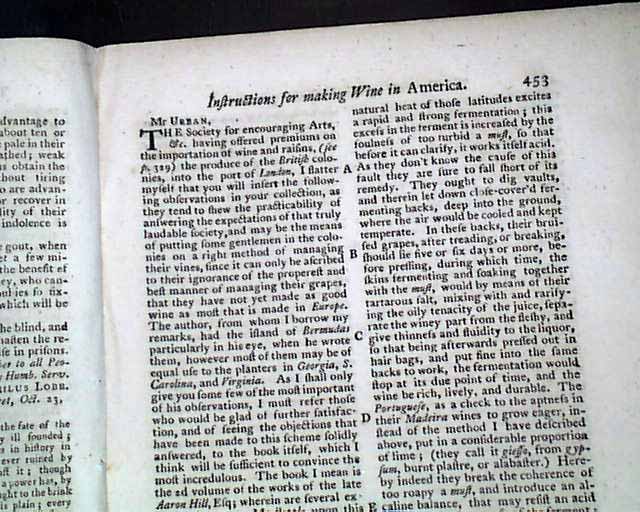 Battle of Quebec in the French & Indian War...

This issue contains a terrific & very detailed account of the Battle of Quebec, headed "Operations of the Army Before Quebec" and "Authentic Accounts of the Proceedings Before Quebec", taking seven pages of text and includes the "Articles of Capitulation Agreed on Between Gen. Townshend & M. DeRamzay, commander of Quebec" (see for portions). Also within: "Instructions for Making Wine in America", which is an extremely early report on wine making in the colonies (see photos for a portion of the text).
The full page plate titled: "A Map of the Island of Orleans with the Environs of Quebec" is lacking.
Complete in 56 pages, 5 3/4 by 8 7/8 in. with wide, untrimmed margins, full title/contents page with an engraving of St. John's Gate, very nice condition.
A very nice magazine from the French & Indian War from the "mother country" with a wide range of varied content. This was the first periodical to use the word "magazine" in its title, having begun in 1731 and lasting until 1907.