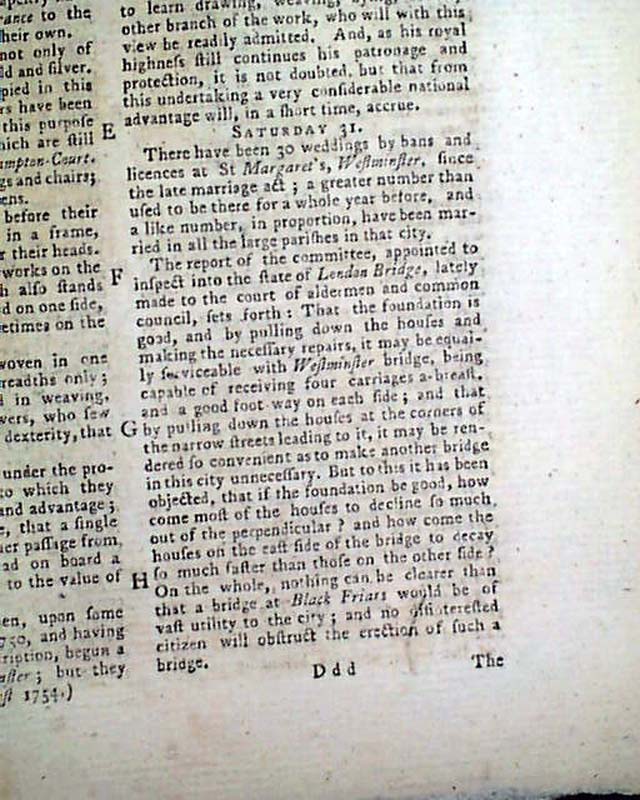 THE GENTLEMAN'S MAGAZINE, London, August, 1754  Present is a foldout plate showing: "...a new contrivance for the Scaping of Clocks & Watches, and Seven Minute Objects as Magnified by the Microscope" (see image), which includes the related article: "Microscopical Objects, with cuts & Remarks".
In the "Historical Chronicle" section near the back are a few reports under the heading: "America" including an item from Boston reading: "Gov. Shirley is gone from Boston to the Garges & Kennibeck...with 1100 men to observe the motions of the French. A ship of 900 tons is arrived at Louisburgh from France with cannon & ammunition of all sorts..." and an item from New York includes: "Our governor & the commissioners from the several neighbouring provinces are arrived at Albany but the Indians are not yet come down...".
Another plate shows a memorial to "James Flemming Esq., Major General of all His Majestie's Forces..." again, with a corresponding article.
Among the additional articles noted in the table of contents are: "Engineers of armies the Proper Road Makers" "Great Utility of a Turnpike Road to the West Country" "Contests in Jamaica, on What Grounded" "Receipt for the Scurvy used in Greenland" "Sure Way of Securing Dead Bodies in the Grave" "Flemming's Monument Explain'd" "Account of Scotland", "Dress of the Inhabitants of Inverness" "Fort William Described" "Mayer's Account of his New Tables of the Sun and Moon" "Eruption of Mount Etna"  & more.
Complete in 48 pages, full title/index page, wide, never-trimmed margins, 6 by 8 3/4 inches, great condition. All plates called for are present.