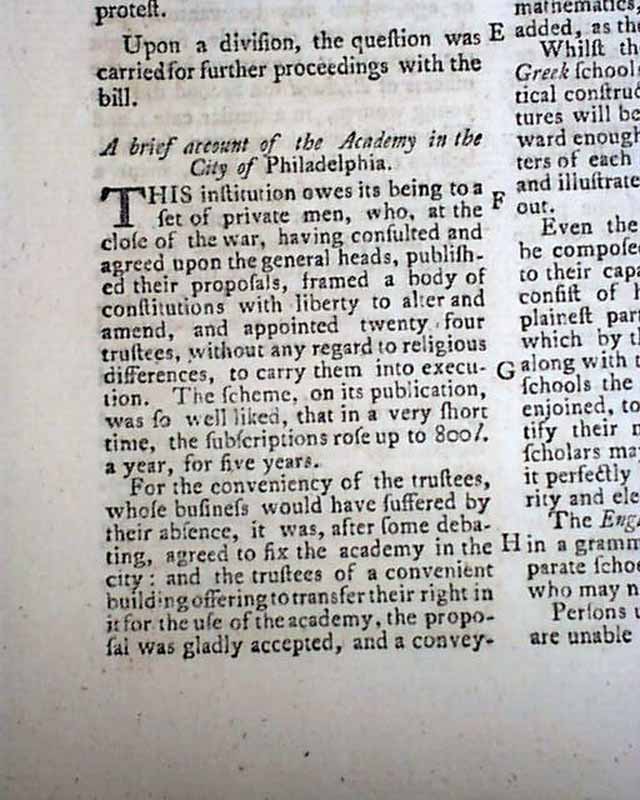 THE GENTLEMAN'S MAGAZINE, London, December, 1753  Of particular interest is: "Annual Medal of the Royal Society" which has Ben Franklin's name on it. There is related text noting: "...This mark of distinction is double due to Mr. Franklin. It is due to him as a philosopher; it is due to him as a man. The successful experiments of this philosopher have given us probable hopes of being one day able to secure ourselves from the dreadful effects of lightning. And the publick spirit, the modesty, the goodness & benevolence of the man have been long conspicuous & the effects of them long felt in the country where he resides."
Near the back is the "Historical Chronicle" with the latest news reports of the day which includes a report from New York under the heading "America" concerning a kidnapping by Indians near the Allegheny River.
Another interesting item has: "Observations of the Last Eclipse of the Sun" (with a small illustration).
Among other articles are: "A Brief Account of the Academy in the City of Philadelphia", a full page print--with description--of the Golden Thrush bird; "Of Preparing Apples for Cyder", and a fullpg. plate of the: "...new Bridge at Hampton Court...".
The baronets arms prints are not present.
Complete in 48 pages, wide untrimmed margins, 5 3/4 by 8 3/4 inches, very nice condition.