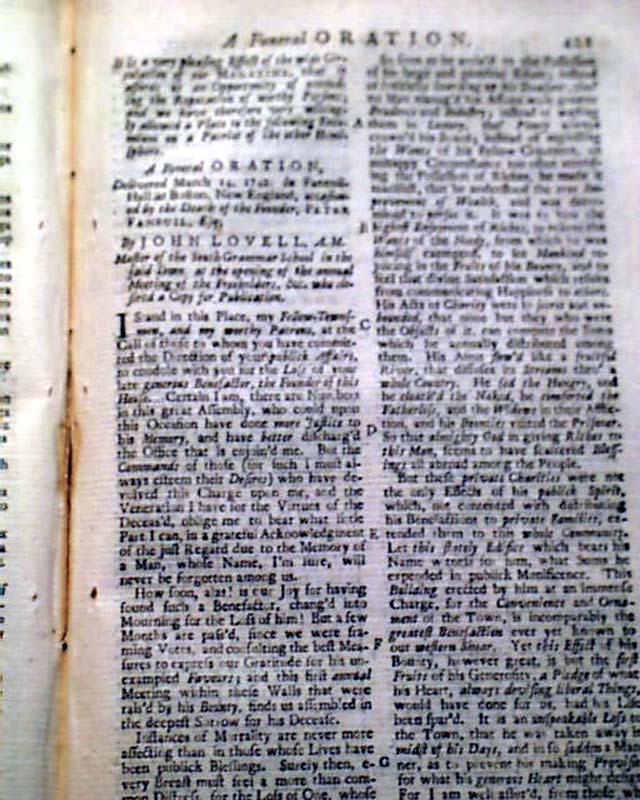 THE GENTLEMAN'S MAGAZINE, London, August, 1743  This issue includes a nice & quite detailed full page map headed: "Plan of the Battle of Dettingen, as Published by Authority" plus a full page key noting the various locations on the map. The Battle of Dettingen, part of the War of Austrian Succession, was a highly significant victory for the British Army, being the only time in modern history that a British force has been led into battle by a reigning monarch: King George II.
There is a full page chart headed: "Grants in Q. Anne's Wars". Two full pages are taken up with a list of: "Ships Taken by the Spaniards since our last List". Over a full pg. is taken up with: "A Funeral Oration" from Boston, in New England, for the death of Peter Faneuil, the founder of now-famous Faneuil Hall.
Among other articles in this issue are: "Mercury's Transit over the Sun" which includes an engraving of the sun; "Of Foreign Servants", and more.
Near the back is a section headed: "Historical Chronicle" with news from England & other parts of Europe as well as an item headed: "Extract of a Letter from Carolina".
There are no plates called for in this issue.
Complete in 56 pages, wide, never-trimmed margins, full title/index page featuring an engraving of St. John's Gate, 5 1/2 by 8 3/4 inches, great condition.