Home > Back to Search Results > Oglethorpe works with the Indians to settle Georgia...
Click image to enlarge 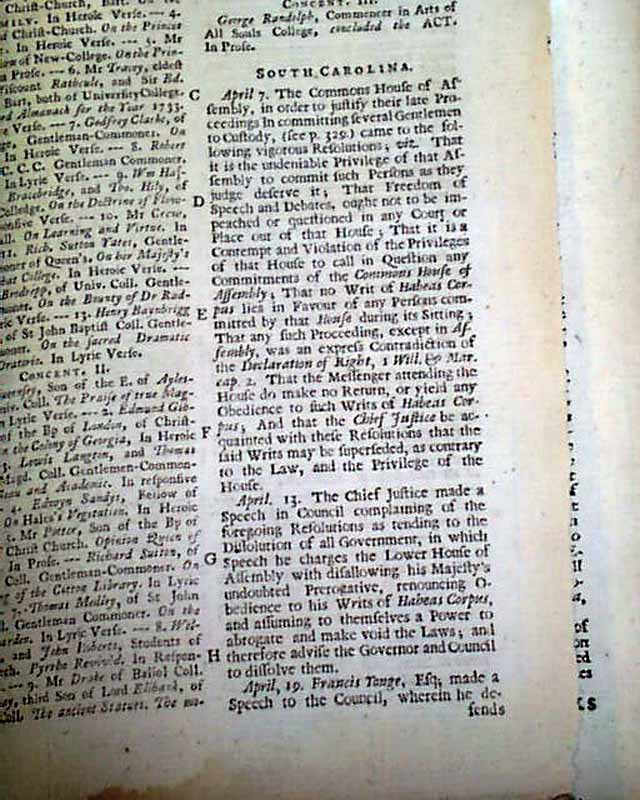 Oglethorpe works with the Indians to settle Georgia...

Item # 642690 THE GENTLEMAN'S MAGAZINE, London, July, 1733  The most notable item is the report taking three-quarters of a column and headed: "From Georgia" with a Savannah dateline, and reading in part: "Mr. Oglethorpe return'd from Charles Town...& found here the Chief men of all the Lower Creek Nation...to treat of an alliance with the Colony. Mr. Oglethorpe received them in one of the new houses the same day...they first claimed all the ground to the south of the river Savannah...so they freely gave up their right to all the land they did not use themselves and offer'd to go & attack the Cherokqueese who they heard had slain some English, if Mr. Oglethorpe would command them, declaring a love for him and his people..." with more (see photos).
Near the back is a rather lengthy report under the heading: "South Carolina" taking about a full pg. (see photos for portions).
Among the articles noted in the table of contents are: "Proceedings on the Army" "The Behaviour of our Malcontents" "Political Creed of the Malcontent Whigs" "Tricks of Pailiffs, Sheriffs, Officers, etc." "Revolution Principles of the Tories" "How the French lost their Liberties" "The Benefit of Religion" "Christianity & Infidelity Examin'd" and more.
Complete in 56 pages with full title/contents page, 5 1/2 by 8 3/4 inches, in nice, untrimmed condition. This is from just the third year of this magazine's existence & before any maps or plates were included.