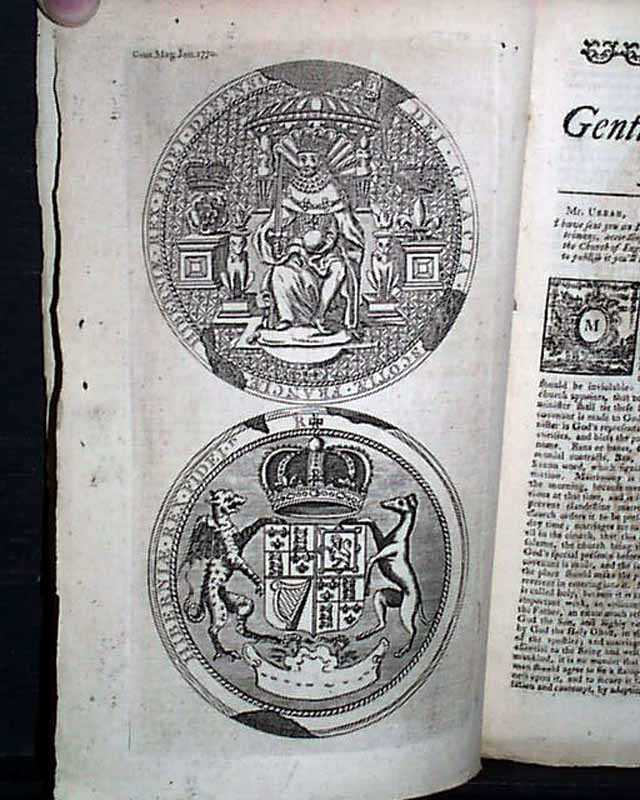 THE GENTLEMAN'S MAGAZINE, London, January, 1769  Contents include: "A New Voyage to the West Indies, Giving an Account of the various Nations that dwell near the great river Mississippi, ..." which is extremely descriptive of the western lands of America and the native American Indians in the area (see for portions) and taking over 4 pages; "...Letter from General Paoli to an English Gentleman" "Account of the late Abdication in Sweden"
Noteworthy is: "An Address to the Americans by the Author of the Farmer's Letters", being John Dickinson. This takes 1 1/2 pages and includes: "In the great & important question now before us, my countrymen, a question on which the liberty or bondage...of millions now & tens of millions hereafter, will depend, it is incumbent on us to study the most perfect unanimity in sentiment & action. Like a band of brothers these colonies should be indissolubly firm in defending the sacred fire of freedom..." and near the end: "...To tyrants and to tyranny a foe, I will maintain my liberty at the hazard of my life..."with much more great content (see for portions).
Yet another page has "An American Petition to the King's Most Excellent Majesty" concerning thanks for repealing the Stamp Act & which takes over a full page. Another page has 4 engravings of a "Medallic Account of Martin Luther" (see).
Most of a page is taken up with "American News" which relates some of the growing troubles between England & America, including some nice content on the troubles of John Hancock & his shipment of illegal goods in his ship "Liberty" (see). This is followed by the "Historical Chronicle" which has the latest news reports of the day.
Included is one of the nicer plates of the era, titled: "A View of the House of Peers. The King Sitting on the Throne, the Commons attending him." which folds out to 10 1/2 inches (see).
Complete in 56 pages, full title/contents page featuring an engraving of St. John's Gate, 5 by 8 1/4 inches, very nice condition.