Home > Back to Search Results > Much on the Battle of New Orleans & St. Marys...
Click image to enlarge 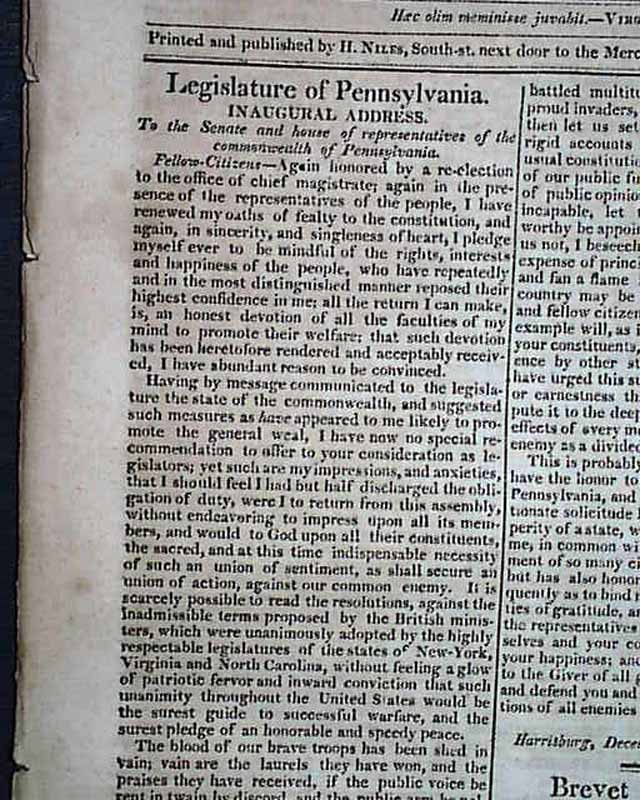 Much on the Battle of New Orleans & St. Marys...


NILES' WEEKLY REGISTER, Baltimore, Feb. 4, 1815  Inside has: "Events of the War - New Orleans & St. Mary's" which has some nice detail & includes a letter dated Dec. 26, 1814 signed in type: Andrew Jackson which includes in part: "...The enemy's force exceeded our by double & their loss was proportionally greater...I hope to be able to sustain the honor of our arms & to secure the safety of this country."
This is followed by two more letters signed by Jackson, one taking a full page. There is then: "Unofficial Accounts" with much on the military action at New Orleans including over 6 pages of coverage of both New Orleans and St. Marys.
On the front page under "Legislature of Pennsylvania" is the "Inaugural Address To the Senate and House of Representatives of the Commonwealth..." The address is signed in type: Simon Snyder. Snyder was the 3rd governor of Pennsylvania.
The coverage of the capture of the U.S. frigate President is within as well.
A nice issue on the final battle of the War of 1812, actually concluded after the treaty of peace had been signed.
Sixteen pages, 6 by 9 1/2 inches, some light foxing, in overall nice condition.