Home > Back to Search Results > Volume one issue of the National Police Gazette...
Click image to enlarge 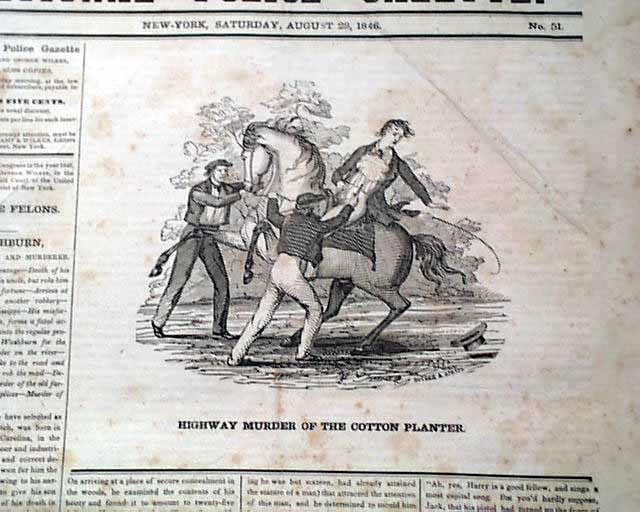 Volume one issue of the National Police Gazette...


NATIONAL POLICE GAZETTE, New York, Aug. 29, 1846  A very famous title of the 19th century which lasted until 1977. And this is a volume one issue (#51) from when it was of smaller size than what we typically find.  A Collier's article from 1928 on this title mentioned: "...it attained a circulation of 15,000 in a few weeks through the attraction of a most interesting record of horrid murders, outrageous robberies, bold forgeries, astounding burglaries, hideous rapes, vulgar seductions, and recent exploits of pickpockets and hotel thieves...". In its early years it was entirely focused on crime, but further into the 19th century it became more of a sporting newspaper, quite desired by baseball collectors today.
The front page features a print of: "Highway Murder of the Cotton Planter" with the balance of the issue taken up with various crime reports. The entire back page is a: "List & Description of Deserters From the United States Army" from during the Mexican-American War.
Eight pages, archival repair at the spine, minor foxing & damp staining mainly near the margins, good condition.