Home > Back to Search Results > Quite rare set of the 'North Georgia Gazette & Winter Chronicle'...
Click image to enlarge 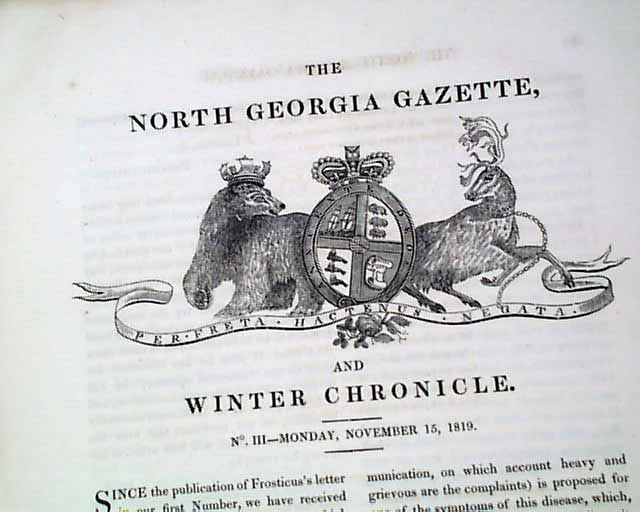 Quite rare set of the 'North Georgia Gazette & Winter Chronicle'...


NORTH GEORGIA GAZETTE AND WINTER CHRONICLE, the complete set of 21 issues bound in a volume including the half-title, First edition.
A weekly newspaper edited by Edward Sabine and written by members of the first Parry expedition (1819-1820) while at their winter quarters at Winter Harbour on Melville Island during them attempt to discover a North West Passage. It was circulated among the men in manuscript and, upon their return to England, was published by John Murray (see titlepg.). The object of the newspaper was to assist in enlivening the tedious & inactive winter months. . The first issue circulated among the officers of the expedition on November 1, 1819.
The paper was solely designed to promote good humors & amusement. All communications were to be placed in a box which was placed on the capstan of the 'Hecla', the editor possessing the one & only key to the box.
As the newspaper passed from hand to hand, it became increasingly popular, being issued weekly until the commencement of the return of the expedition. The final issue, number 21, was written on March 20, 1820.
On arriving safely back in England, editor Captain Sabine received so many requests for  the manuscript that he arranged for the publication of the entire 21 issue set. Publisher John Murray of Albemarle St., London, done in 1821. This is a first edition; a second edition was done in 1822.
Nice title page with a coat-of-arms engraving, also a page with a note from the editor, Edward Sabine as to the purpose  of this publication, dated: "London, April 20th, 1821". Also included is: "Proposals For the Establishment Of A Newspaper on board the Ships Employed in the Discovery of a North-West Passage".  Four pages of "Contents" as well. Each of the 21 issues has its own date and is headed with a coat-of-arms. Period bindings show moderate wear, library tape at the spine, interior pages are untrimmed with very wide margins and in great, very clean condition. Measures 9 by 11 1/4 inches.
Also included & lightly taped to a flyleaf is a cut signature of Captain Sabine.
A quite rare publication of an intriguing set of newspapers and the first we have encountered.