Home > Back to Search Results > Davy Crockett in Congress...
Click image to enlarge 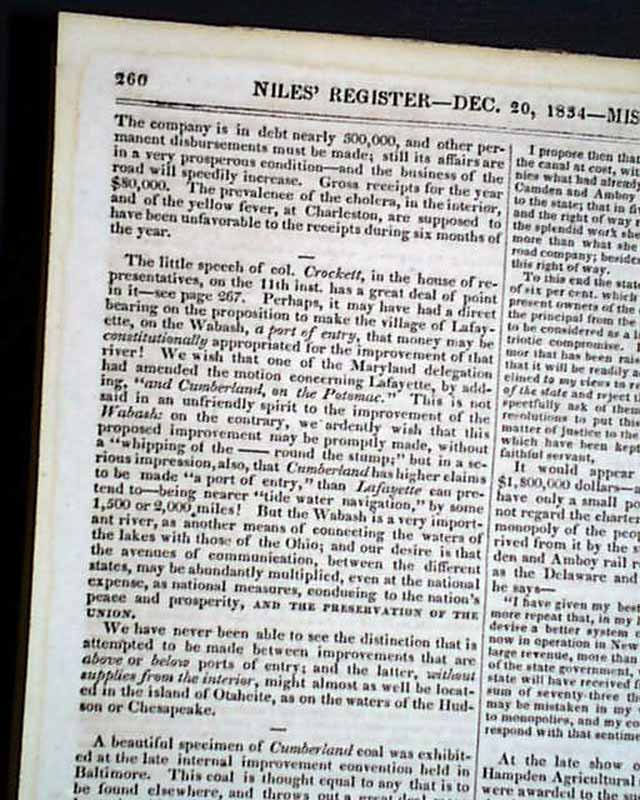 
NILES' WEEKLY REGISTER, Baltimore, Dec. 20, 1834  In reports from Congress is text noting Davy Crockett's comments, with: "Mr. Crockett submitted the following resolutions:..." and a bit further on: "Mr. Crockett said he feared gentlemen did not understand the nature of his resolution. It was a mere inquiry whether those rivers were of a national character or not..." with more (see). And another item on an earlier page references Davy Crockett's comments in Congress, beginning: "The little speech of col. Crockett in the house; of representatives on the 11th inst. has a great deal of point in it..." with more (see).
Other items in this issue include: "Free Negro Labor" "Elections", reports from Congress which includes two letters signed in type by the President: Andrew Jackson; "Trial of the Convent Burners" and other items.
Sixteen pages, 6 1/4 by 9 3/4 inches, very lite dampstaining around the top and right margins and lower right corner, otherwise in very nice condition.

This newspaper was a prime source for national political news of the first half of the 19th century. As noted in Wikipedia, this title: "...(was) one of the most widely-circulated magazines in the United States...Devoted primarily to politics...considered an important source for the history of the period."