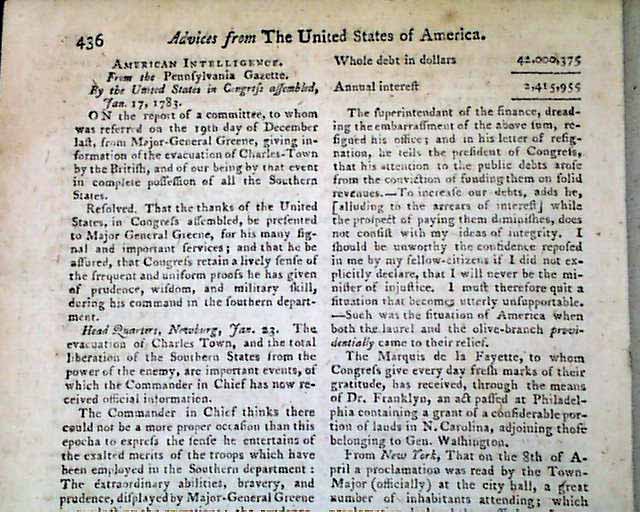 Near the back is over 1 1/2 pages of: "Advices From The United States Of America" from before the formal treaty ending the Revolutionary War was signed. Included is a report in Congress concerning: "...information of the evacuation of Charles-Town by the British & of our being by that event in complete possession of all the Southern States." with thanks given to General Greene for his leadership. This is followed by more concerning gratitude towards Greene.
There is also a list concern the debts incurred by the United States during the war & to whom they are owed. Mention of Congress granting to the Marquis de la Fayette land in North Carolina adjoining George Washington's property. Plus there are several other items concerning the closing moments of the Revolutionary War, as well as a list of the white population in each of the colonies, and a list of the members of Congress from each of the states.
Includes both of the plates called for, one of which is a fold-out which has some trimming near lower corner so as to fold in the issue.
Complete in 88 pages, 5 1/4 by 8 1/4 inches, full title/contents page featuring an engraving of St. John's Gate, tiny nice condition.

A very nice magazine from the year the peace treaty was signed ending the Revolutionary War, with a wide range of varied content. This was the first periodical to use the word "magazine" in its title, having begun in 1731 and lasting until 1907.