Home > Back to Search Results > Ticonderoga... Article by Ben Franklin... Much more...
Click image to enlarge 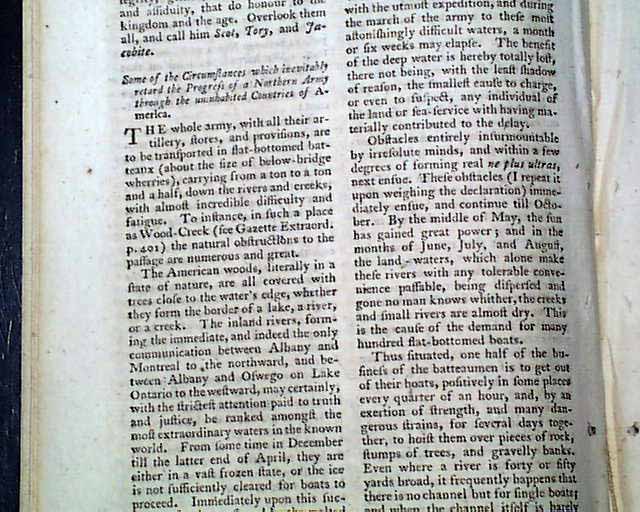 Item # 642257 THE GENTLEMAN'S MAGAZINE, London, Oct., 1777  Inside has: "Some of the Circumstances which Inevitably retard the Progress of a Northern Army through the uninhabited Countries of America" deals with the difficulties of Burgoyne's army in the colonies, not used to being in an environment so heavily forested. This interesting article takes nearly two pages. Further on is: "Address to the People of Massachusetts Bay by one of their most Popular Preachers" begins: "Resentment has fired the soul of every lover of his country at the disgraceful evacuation of Ticonderoga...All our accounts agree that our force in Ticonderoga nearly equaled the enemy in numbers..." with much more interesting content on the battle of Ticonderoga from several months prior. Over 1 1/2 pages are taken up with: "Useful Hints for Learning to Swim, by Benjamin Franklin", signed by him in type: B. Franklin.
Also in this issue: "Substance of some Trials...Respecting American Captures...".
Near the back is over a full page of: "American News", bits including: "...the unsuccessful attempts of the Rebels on Staten Island, at King's Bridge...a body of about 2000 having landed on Staten Island & surprised a picquet...had defeated them with great slaughter & entirely driven them off the island..." with more. Yet another report includes: "That Gen. Washington be desired to empower the General whom he shall appoint to relieve Gen. Schuyler...Major General Gates was appointed to the command of the Northern Department..." plus more.
Still contains the two full page plates called for, one a print of an African bird called the Honey Guide.
Complete in 48 pages, full title/contents page with an engraving of St. John's Gate, 5 by 8 1/4 inches, great condition.