Home > Back to Search Results > The beheading of Marie Antoinette, the Queen of France...
Click image to enlarge 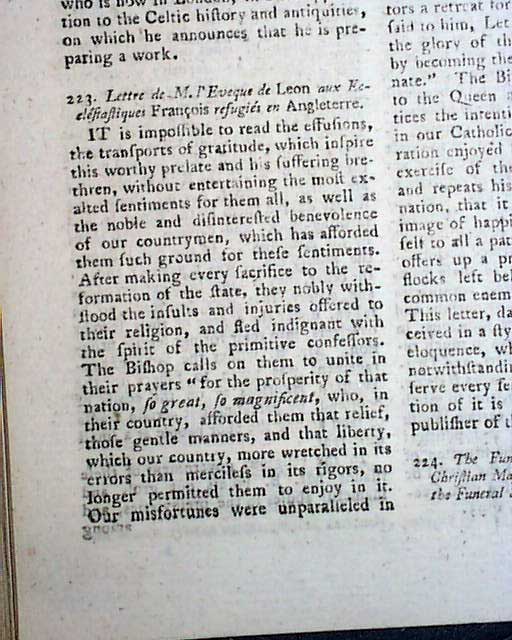 The beheading of Marie Antoinette, the Queen of France...

Near the back under the heading: "Obituary of Considerable Persons", and amongst the listings of many others, is the very historic report of the beheading of Marie Antoinette, the text beginning: "Guillotined, at Paris, in her 38th year, being born Nov. 2, 1755, Marie Antoinette, the beautiful widow of the later French King, Louis XVI....This unfortunate Princess had been condemned on the preceding day by the Revolutionary Tribunal..." with more concerning her trial as well an account of her execution, reading in part: "...As soon as the Queen left the Conciergerie, to ascend the scaffold, the multitude, which had assembled into the courts and the streets, cried out Bravo! in the midst of plaudits. Marie Antoinette had a white loose dress, and her hands were tied behind her back. She firmly round on all sides...and on the scaffold preserved her natural dignity of mind.--Thus then has descendant of the Caesars, condemned by sanguinary judges, perished by the hands of a common hangman..." with a bit more.
There is also a bit of news under the heading "America" (see). And under: "Review of new Publications" is: "The Funeral Oration of His Late Most Christian Majesty Louis XVI, Pronounced at the Funeral Service..." which takes over a full page.
Included are all three full page plates called for.
Complete in 96 pages, full title/contents page with an engraving of St. John's Gate, 5 by 8 inches, great condition.