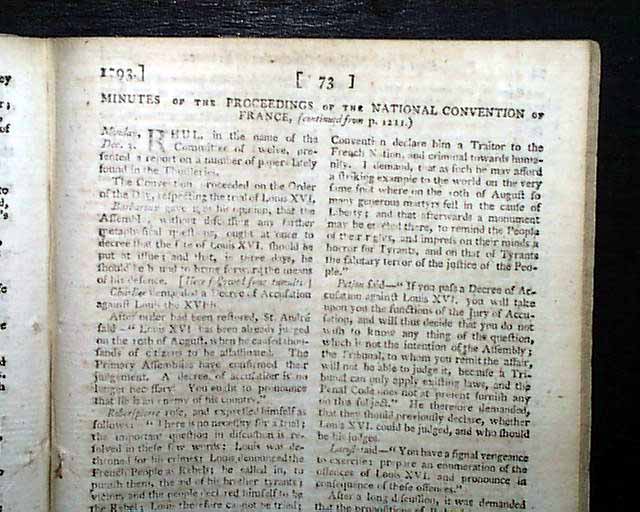 Item # 642036 THE GENTLEMAN'S MAGAZINE, London, January, 1793  The best content is the report headed: "Particular Account of the Murder of Louis XVI" which gives considerable detail of the closing moments of his life, ending with: "...The Confessor fell upon his knees, and implored the King's blessing, who gave it him with an affectionate embrace. The religious & good Monarch then laid his head upon the block with admirable serenity; and he ceased to live in this world. The murder was performed between eleven and twelve o'clock on Monday morning..." with just a bit more (see).
Over seven pages are taken up with the continued reporting of: "Minutes of the Proceedings of the National Convention of France" relating to the trial of King Louis XVI. And near the back is a biography of Louis XVI (see).
There is a somewhat brief report from "Pittsburgh, Virginia" as noted, concerning Cornplanter and other Indians attempting to carve out a treaty of peace with the United States (see).
Contains all three full page plates called for.
Complete in 96 pages with full title/contents page featuring an engraving of St. John's Gate, 5 by 8 1/4 inches, minor margin wear to the first several leaves, nice condition.