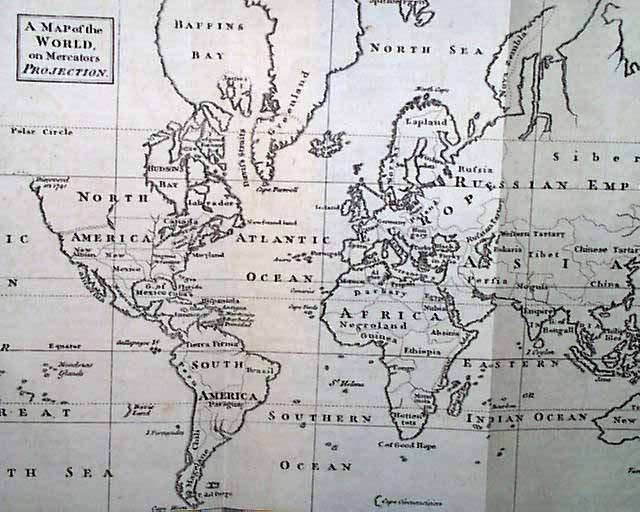 Item # 641361 THE GENTLEMAN'S MAGAZINE, London, December, 1755   Certainly the prime item in this issue is the great foldout map titled: "A Map of the World on Mercator's Projection" which shows the entire world, although portions of unexplored Canada and the northwest of America are undefined (see). This map folds out to measure 8 by 11 1/2 inches, bound in close to the bottom portion of the left margin with no loss, great condition.
Also an interesting variety of articles including: "Scheme For a New Lottery" "Account of American Pine" "Description of a Flying Lizard" with a print of it in one of the plates (see); "Description of the City of Lisbon" and much on the earthquake there; plus many other articles.
Near the back is the "Historical Chronicle" which has a section headed: "American Affairs". Included here are French & Indian War reports including: "Our campaigns in this part of the world are over for the season. Gen. Shirley is returned to Albany from Oswego...with about 3000 men, building two small forts. Gen. Johnson has discharged his Indians..." with more (see).
In addition to the map the issue also includes the other plate called for.
Complete 48 pages, full title/contents page featuring an engraving of St. John's Gate, 5 3/4 by 8 3/4 inches with wide untrimmed margins, great condition.