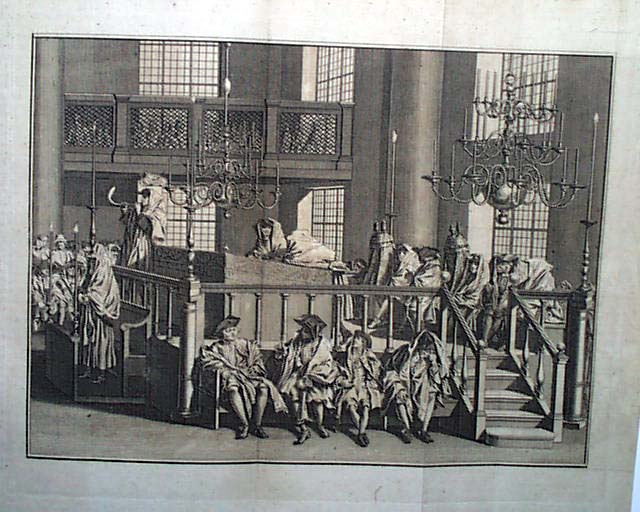 * Rosh Hashanah - the sounding of the ram's horn - print
* Rare look inside the Synagogue at Amsterdam
* General Burgoyne re: the Battle of Saratoga

Certainly the most significant item in this issue is the very nice, rare foldout engraving which is described on the contents page as: "An Inside View of the Jews Synagogue at Amsterdam, and of the Ceremony of sounding the Horn on New Year's Day" (see). This plate folds out to 8 1/2 by 9 1/2 inches and is in great condition. It is mentioned only in a postscript on the facing page: "In consequence of our request to our correspondents, we have received the annexed plate as a specimen of a series representing the religious ceremonies of the modern Jews. the present exhibits an inside view of the Synagogue at Amsterdam (the most superb edifice of the kind in the known world) with the ceremony of sounding the horn on New Year's day; of which a further account...shall be inserted in our next." Note: The "further account" mentioned never came.

Also of significance is an article: "Account of the Examination of Gen. Burgoyne" concerning his actions which lead to losing the Battle of Saratoga, containing some interesting reading (see for portions).
Complete in 48 pages, 5 by 8 1/4 inches, full title/contents page with an engraving of St. John's Gate.