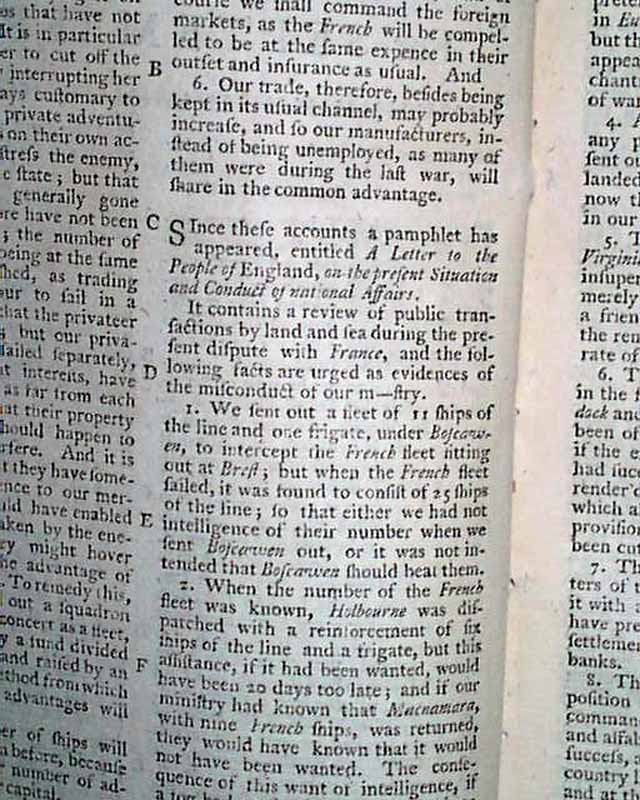 THE GENTLEMAN'S MAGAZINE, London, September, 1755  Over two pages are taken up with: "A Scheme Proposed for Driving the French out of the Continent of America in one Year's Time" which includes some interesting reporting on the on-going French & Indian War, including a list of 14 items which could be done to be successful (see). Bits include: "The seven ships built in Carolina should also be sent into the river Mississippi at the same time that our troops marched from Albany..." and "As soon as Quebec should be taken, 1600 of our regular troops...sent down the river St. Lawrence...would soon take the island of Orleans..." and "The Five Nations & our other friendly Indians will keep the French Indians in eternal subjection..." and much more.
There are more reports on the French & Indian War near the back, with a letter which includes: "The numbers lost in the action under Gen. Braddock...were 508 killed, 474 wounded...most of the wounded were scalped by the enemy...Col. Dunbar left Cumberland fort with the forces under his command...reports that a few days before Gen. Braddock's arrival, the garrison of Fort du Quesne consisted only of 400 men..." & more (see). This is followed by an even more detailed account of Braddock's defeat at Fort DuQuesne.
Also inside: "Account of the British Settlements in N. America...Pennsylvania" which is very descriptive of this colony.
Both full page plates called for are present.
Complete in 48 pages, 5 3/4 by 8 3/4 inches with wide untrimmed margins, full title/contents page features an engraving of St. John's Gate, great condition.