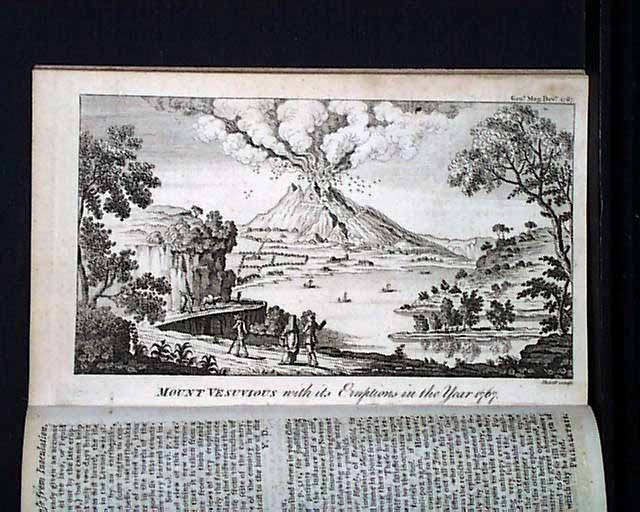 Item # 640631 THE GENTLEMAN'S MAGAZINE, London, December, 1767  This issue features a terrific full page plate captioned: "Mount Vesuvius with its Eruptions in the Year 1767" which is accompanied by a detailed article as well (see).
There is an article: "Resolutions of the Province of New York"
Among the articles within are: "Remarkable Trials in the Star Chamber" "The Mosaic Geography of Eden Demonstrated" "Letter from a Gentleman Charged with Deism" "Anecdote Relative to Oliver Cromwell" "The Doctrine of Papal Infallibility Considered" "Calculation of the Sun's Eclipse" "Account of a Journey Through North Wales" and more.
Near the back is the "Historical Chronicle", taken up almost entirely with various European news but does include a column of: "American News" with reports from Boston, New  York, Philadelphia, and Charleston (see) The full back page is a chart of: "Each Day's Price of Stocks in December, 1767".
The plate of flowers called for is not present.
Complete in 48 pages with full title/contents page and an engraving of St. John's Gate. Measures 5 by 8 inches & in very nice, clean condition.