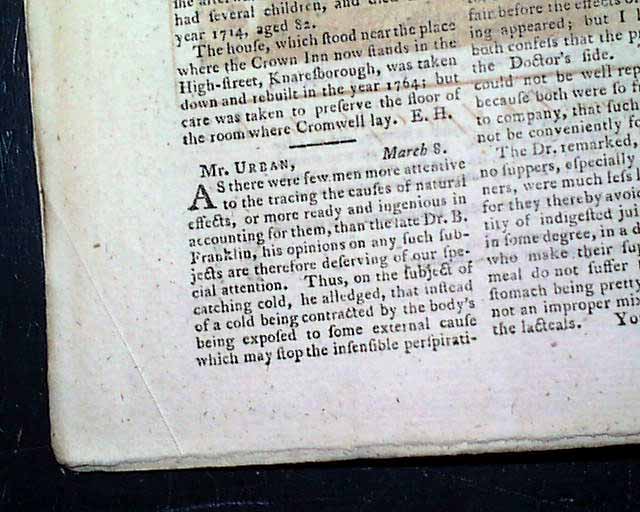 Item # 640630 THE GENTLEMAN'S MAGAZINE, London, March, 1791  An article concerning the respect given to Benjamin Franklin begins: "As there were few men more attentive to the tracing the causes of natural effects, or more ready & ingenious in accounting for them, than the late Dr. B. Franklin, his opinions on any such subjects are therefore deserving of our special attention. Thus on the subject of catching cold..." with more on his theory (see).
An article: "Remarkable Ceremony of Voluntary Torture in India" includes an interesting full page plate of the torture (see).
A great & notable article headed: "Botany Bay" takes over 3 pages with extracts of letters from Governor Phillip to Lord Sydney, dated at Sydney Cove. This is very descriptive of Australia (see for potions). Some great, early content on Australia in this article.
Near the back in the "Obituary of Considerable Persons" section is a report on the death of Rev. John Wesley beginning: "At a quarter before ten o'clock in the morning of a gradual decay, in his 88th year, the Rev. John Wesley, M.A..." with much more and taking over 2 pages (see for portions). Also within: "Jewish and Christian Customs".
Complete with the three full page plates called for, one of which has some damaged (not the mentioned print).
Complete in 96 pages, 5 1/2 by 8 3/4 inches with wide untrimmed margins, full title/contents page featuring an engraving of St. John's Gate, great condition.