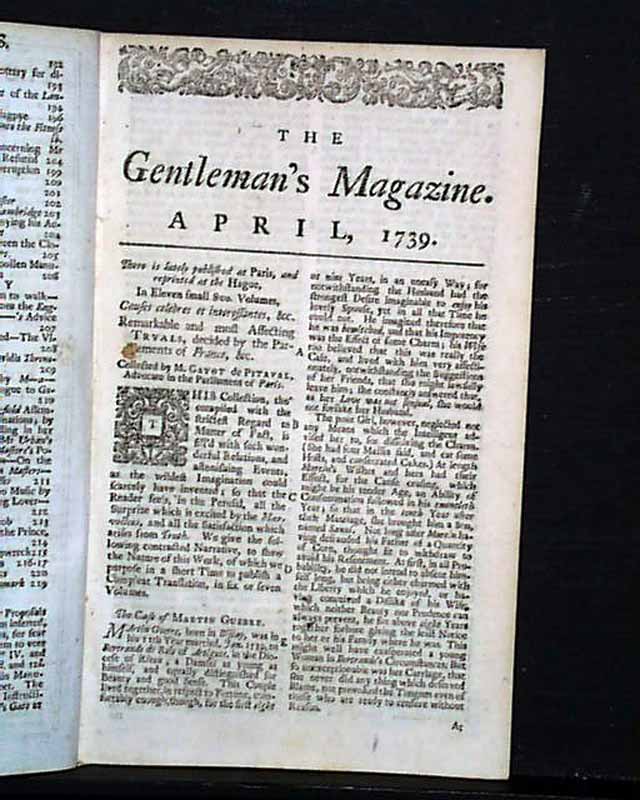 Item # 640628 THE GENTLEMAN'S MAGAZINE, England, April, 1739  Perhaps the best content in this issue is a nice report of the execution of the infamous highwayman Dick Turpin. See the hyperlink for much more on him. The report includes: "The notorious Richard Turpin, and John Stead, were executed at York for horse stealing. Turpin behaved in an undaunted manner; as he mounted the ladder, feeling his right leg tremble, he stamped it down, and looking round about him with an unconcerned air, he spoke a few words to the topsman, then threw himself off, and expir'd in five minutes. He declared himself to be the notorious highwayman Turpin, and confess'd a great number of robberies and that he shot the man that came to apprehend him on Epping Forest and King, his own companion, undesignedly, for which latter he was very sorry..." with more.
Near the back is a section headed: "Historical Chronicle" with news from England & other parts of Europe. One of the reports includes reports from Georgia, a portion including:
"...letters from the camp on St. Simons, 7 miles from Frederica in Georgia...with advice that a court martial had been held for trying 4 or 5 ringleaders of the mutiny against General Oglethorpe, which it seems was not among the new rais'd men but in the two companies which came from Gibraltar..." with more (see).
Other articles include: "Proper Warning Against Slavery" "Letter Concerning the State of Infants" "Their Souls Probably Transmigrate" "Scarcity of Money a Blessing" "The Force of Some Hebrew Particles" and more.
No plates are called for in this issue.
Complete in 54 pages, 5 by 8 inches, full title/contents page with an engraving of St. John's Gate, great condition.