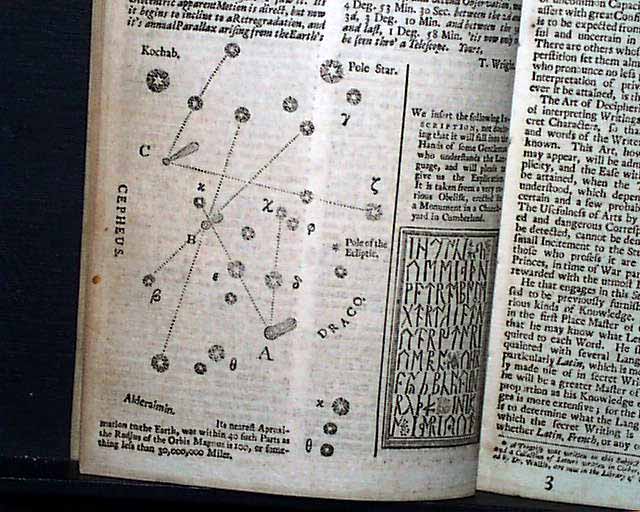 Item # 640626
THE GENTLEMAN'S MAGAZINE, London, March, 1742  One of the articles is concerning a comet,and it includes a nearly half page engraving of various celestial bodies including the comet discussed.
Other items in this issue include: "The Art of Deciphering" "Debate in Holland on Augmenting their Forces" "Observations on Scheme V for Registering Wool" a poem titled: "Valentine's Day" which takes over a full page (see for the beginning); a poem titled: "On the Appearance of the Comet", and much more.
There is much reporting on events in Parliament under the guise of: "Proceedings & Debates in the Senate of Lilliput" as direct reporting on Parliamentary events was prohibited.
Near the back is a section headed: "Historical Chronicle" with news from England & other parts of Europe.
Complete in 56 pages with full title/contents page which contains an engraving of St. John's Gate. Measures about 4 3/4 by 7 3/4 inches, with several tiny binding holes along the left spine, otherwise in good condition.
There are no maps or plates called for in this issue.